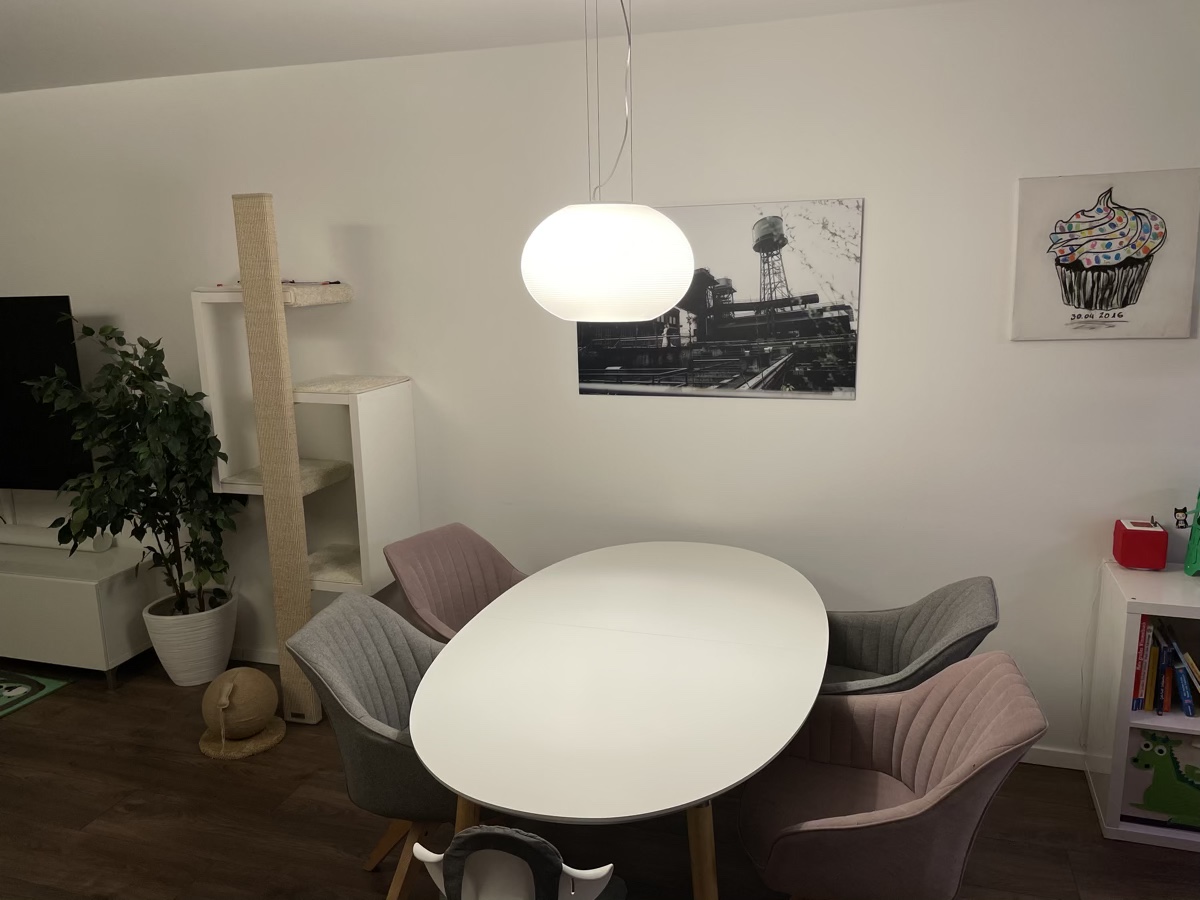 Thats how it looks like above my dining table

I already announced it last week, now I can show you the result: Since yesterday the Philips Hue Flourish is floating above my dining table. Today I would like to share with you my first experiences around the installation and of course the first impression after the installation.

But first let’s have a look at the previous state. Up to now I used a pendant luminaire with three conventional E27 lamps from Philips Hue. With the filament lamps, I couldn’t quite get used to the fixed color temperature, but the topic has been settled anyway since we turned the table by 90 degrees in daily life. 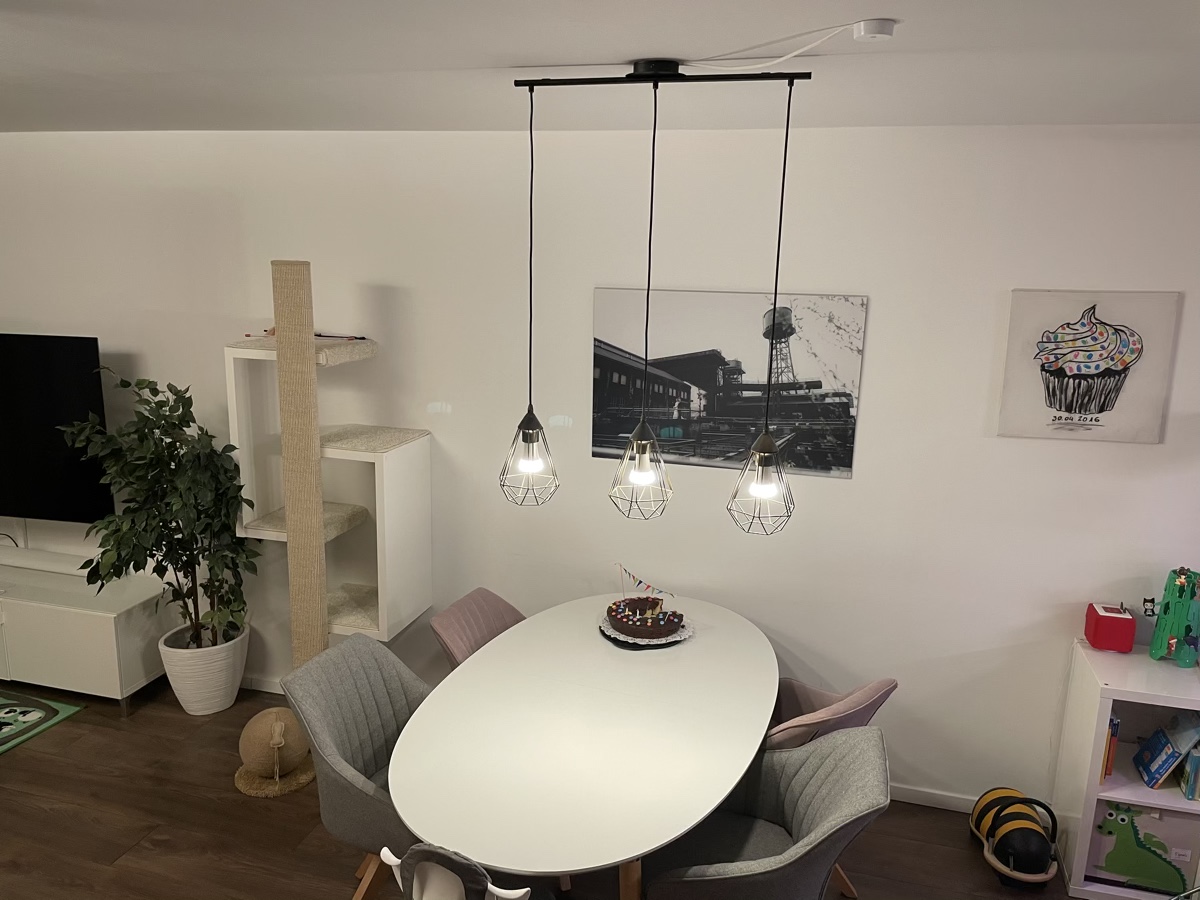 But since we also place the extendable table lengthwise to the wall, for example when we have visitors and need to accommodate more than five people, we looked for a round pendant lamp. The requirements here are quickly explained: It should be Hue-compatible. The pendant luminaires with three E27 sockets would certainly have been the cheaper alternative, but visually none of the numerous candidates were able to convince us.

During a visit to the DIY store I was fortunately able to convince my wife to switch to the Philips Hue Flourish pendant luminaire. The technical data are quite good: besides the Philips Hue Ensis, it is the only pendant luminaire in the Hue portfolio that covers the entire color spectrum thanks to White and Color Ambiance. With up to 3,000 lumens, it is also as bright as almost four standard E27 lamps from Philips Hue.

Philips Hue Flourish can be hung from 40 to 180 centimeters 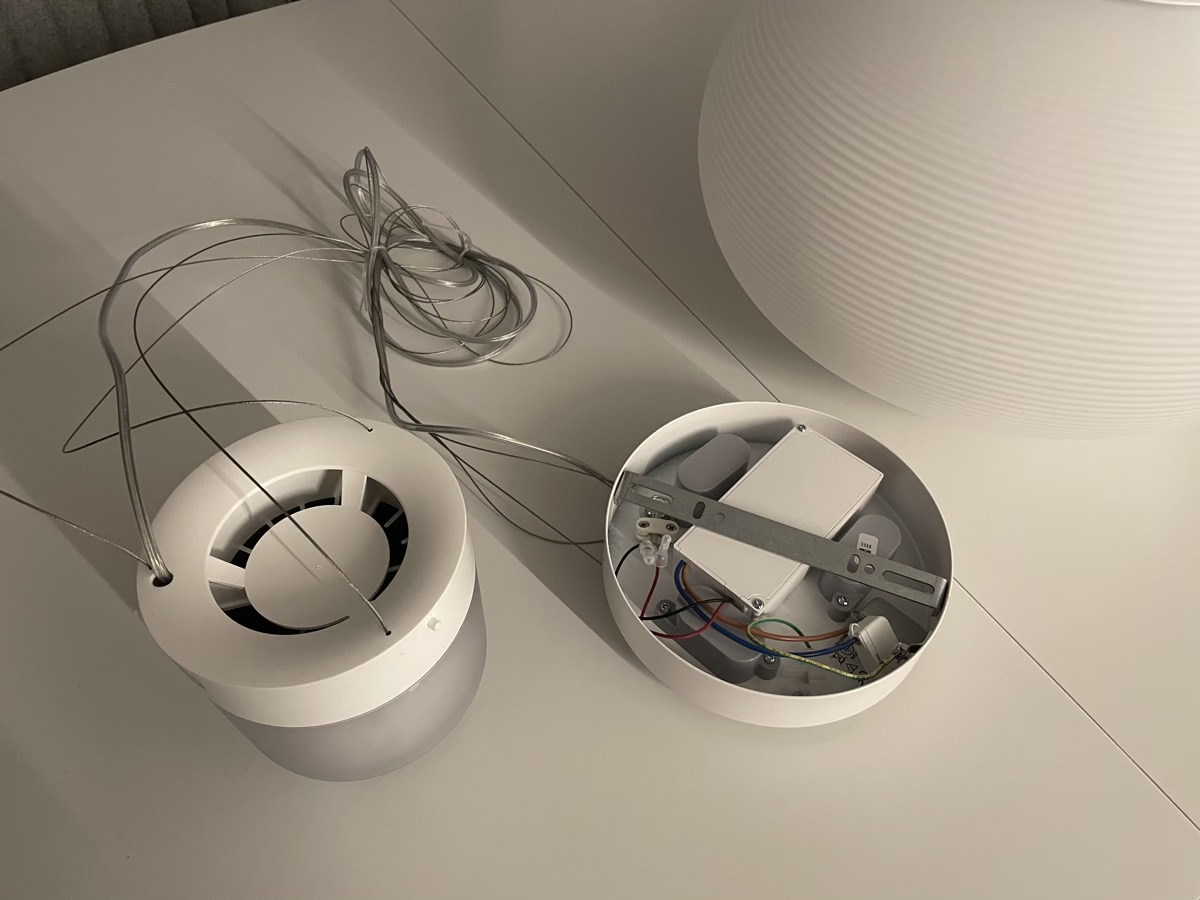 The Flourish pendant lamp is hanging on three wires, which can be easily adjusted in length. The manufacturer specifies a maximum length of 180 centimeters, which can be reduced to 40 centimeters. In addition, there is the 40 centimeters from the lamp head. The wires disappear inside the ceiling section in three small boxes. The power cable, on which no weight is suspended, must also be pushed in. This can also be pushed into the round connection box, but at some point it really gets tight here.

Above our dining table the Hue Flourish pendant lamp hangs relatively high, the three wire ropes have a length of less than 60 centimeters. The power cable should be able to be led up decoratively and I would have liked to make it a little shorter, but unfortunately I can’t get it pushed in any further. For this reason, the three plastic clamps with which the power cable should be fixed to the three wire ropes are absolutely useless.

Unfortunately I can’t just look into the holder at the top. Here I had to cut a small slit at the edge before, because we did not fix the Hue Flourish directly to the lamp connection. Possibly the connection cable that is inserted at the side of the box makes it impossible to push the power cable of the Flourish further into the box. 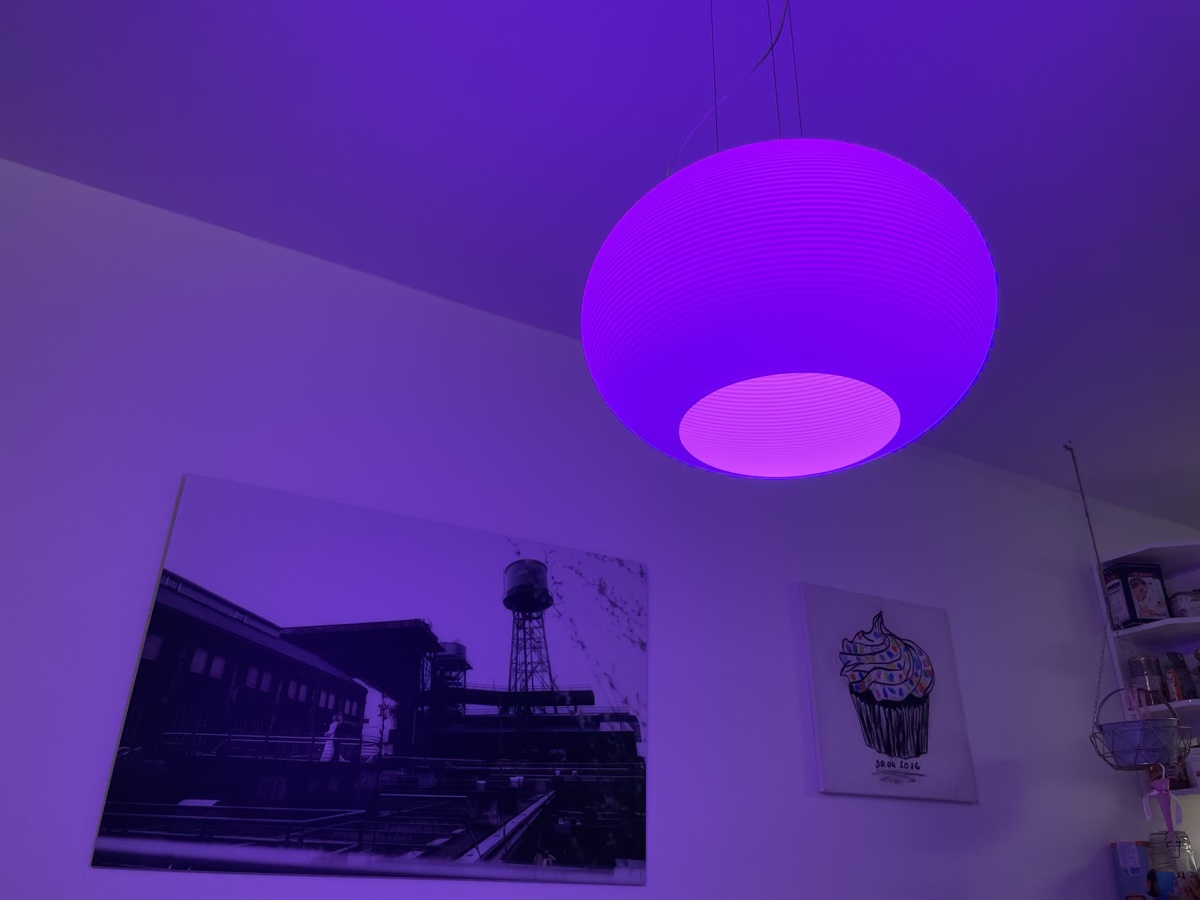 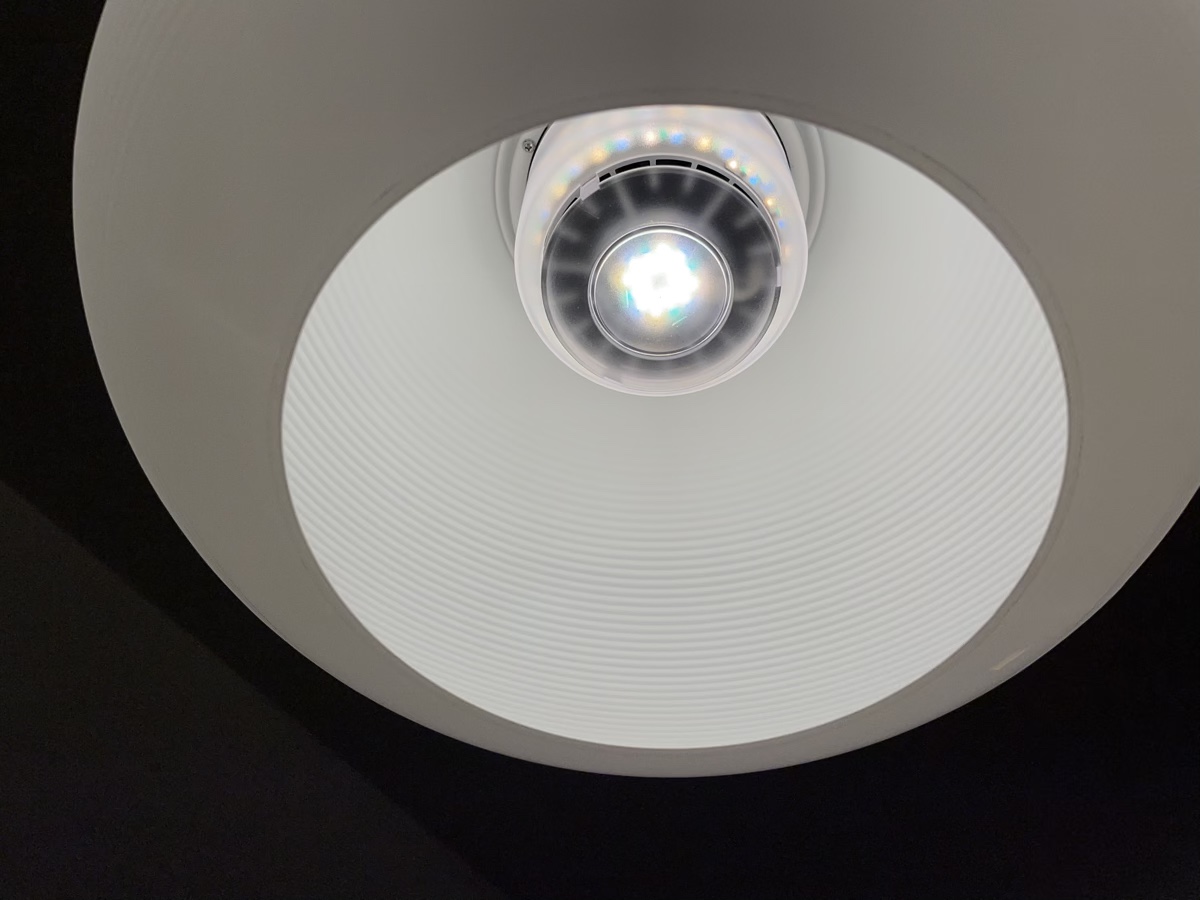 Maybe I will improve it somehow, but we still like the result – and that’s what counts. After the pairing with the Hue Bridge and the setup with the Hue App, the first result was very satisfying in any case: Also thanks to the frosted glass luminaire head, the Flourish pendant lamp provides a really pleasant, soft light. White and Color Ambiance gives you all the options you need and if you want something a bit more unusual, you can even choose a bright color.

Interesting to mention is certainly how the Hue Flourish looks like inside. The actual light body has the shape of a cylinder. On the outer side a light strip is rolled up, which shines in a 90 degree angle to the side. In addition there are more LEDs at the bottom of the cylinder, which shine directly downwards. Together with the lamp head which is open at the bottom, this not only ensures high brightness but also uniform illumination. 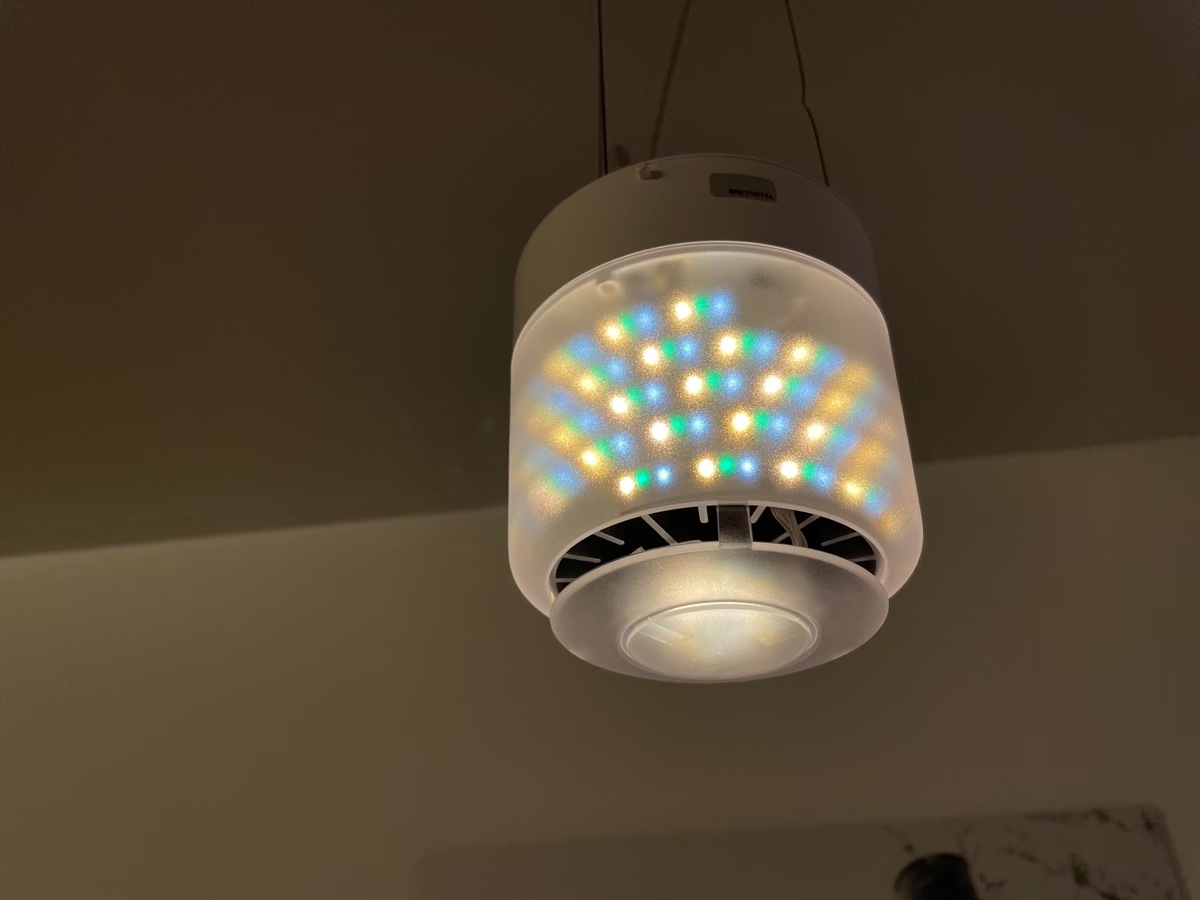 First and foremost, of course, the Philips Hue Flourish pendant is all about meeting your personal taste – I really can’t say anything about that. We like it very much and we think the outcome is great. The only problem we had was shortening the power cable, although I’m not sure if I caused the problem myself.

By the way, for me with a quite full bridge, the Hue Flourish has another advantage: Instead of the three lamps we had before, only one place on the bridge is used. With up to 3,000 lumens I even have a few more brightness than before. But you should keep in mind: The installation is in fact only possible with two helping hands.