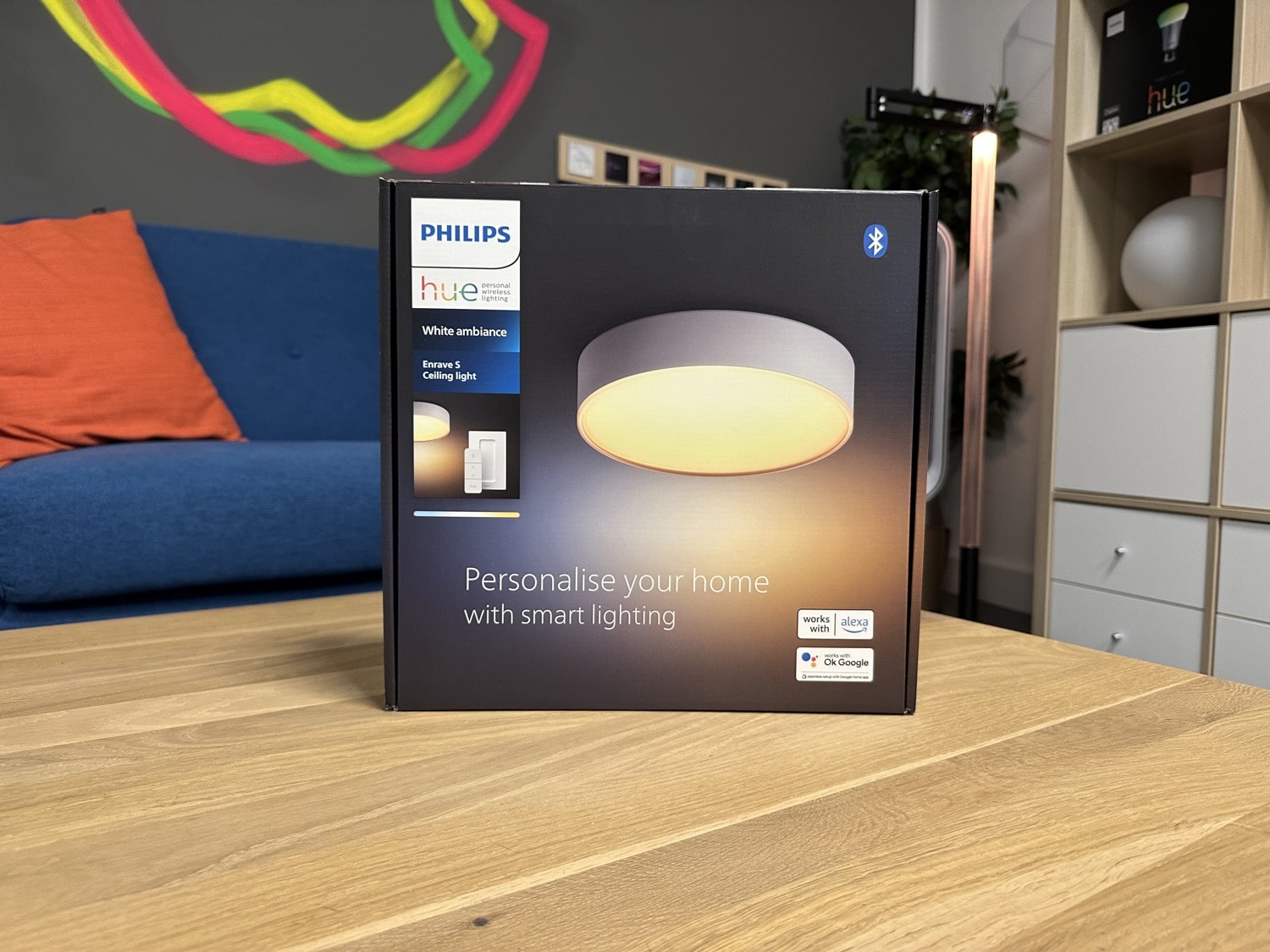 Some time ago, I introduced you to the large Philips Hue Enrave. The ceiling light with White Ambiance technology does a very good job in the children’s room. Today I take a look at the small model of the Hue Enrave with a diameter of only 26.1 centimetres. Not without reason, because the small ceiling light is one of the products that will become more expensive from February. The list price will rise from 109.99 euros to 119.99 euros.

Since we moved in almost five years ago, there are only two rooms in which I have not installed ceiling lighting. In the utility room and the storage room, simple “construction sockets” still hang from the ceiling. These are fitted with a simple Hue bulb, but at some point you have to tackle a building site like this. 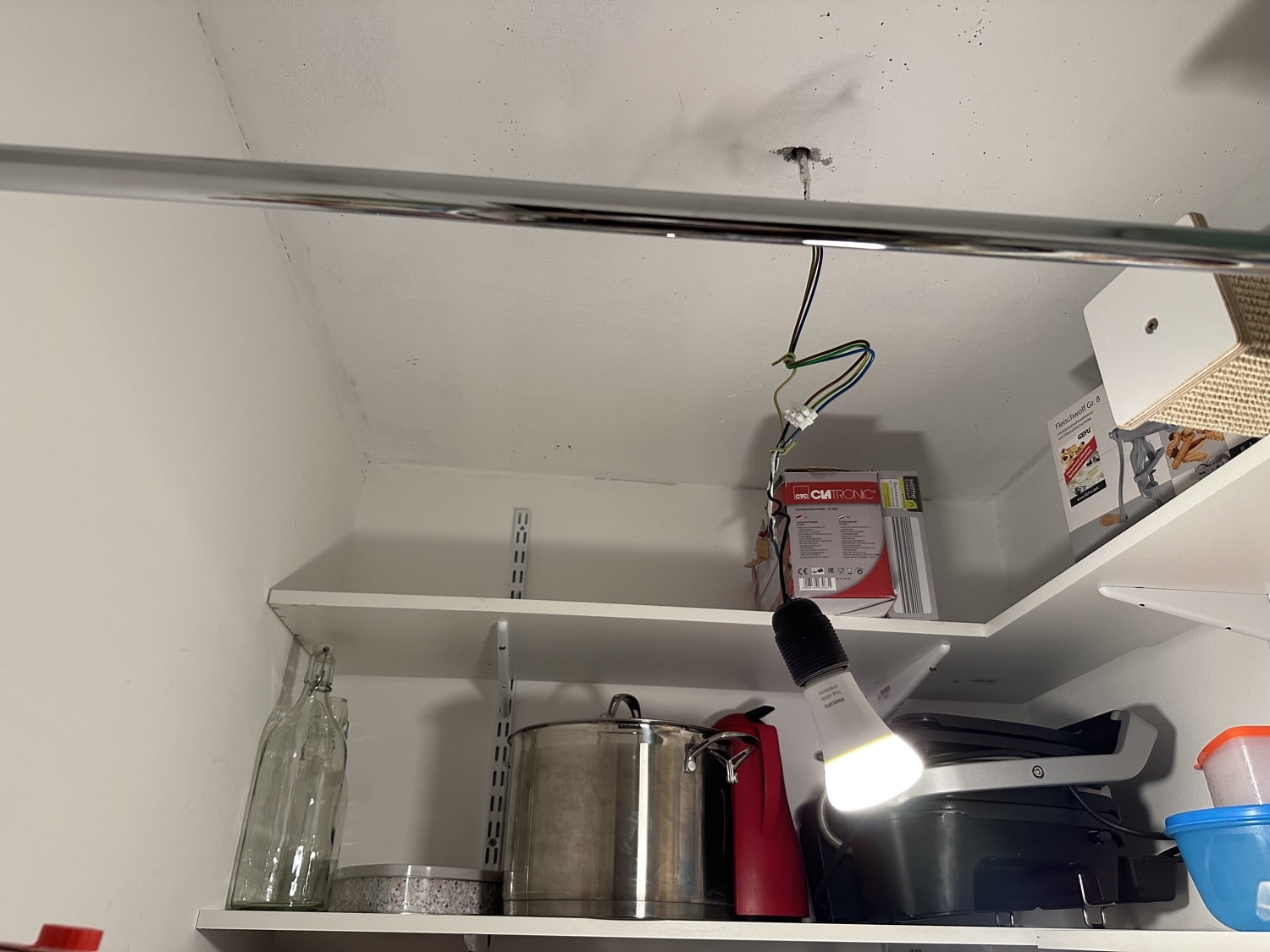 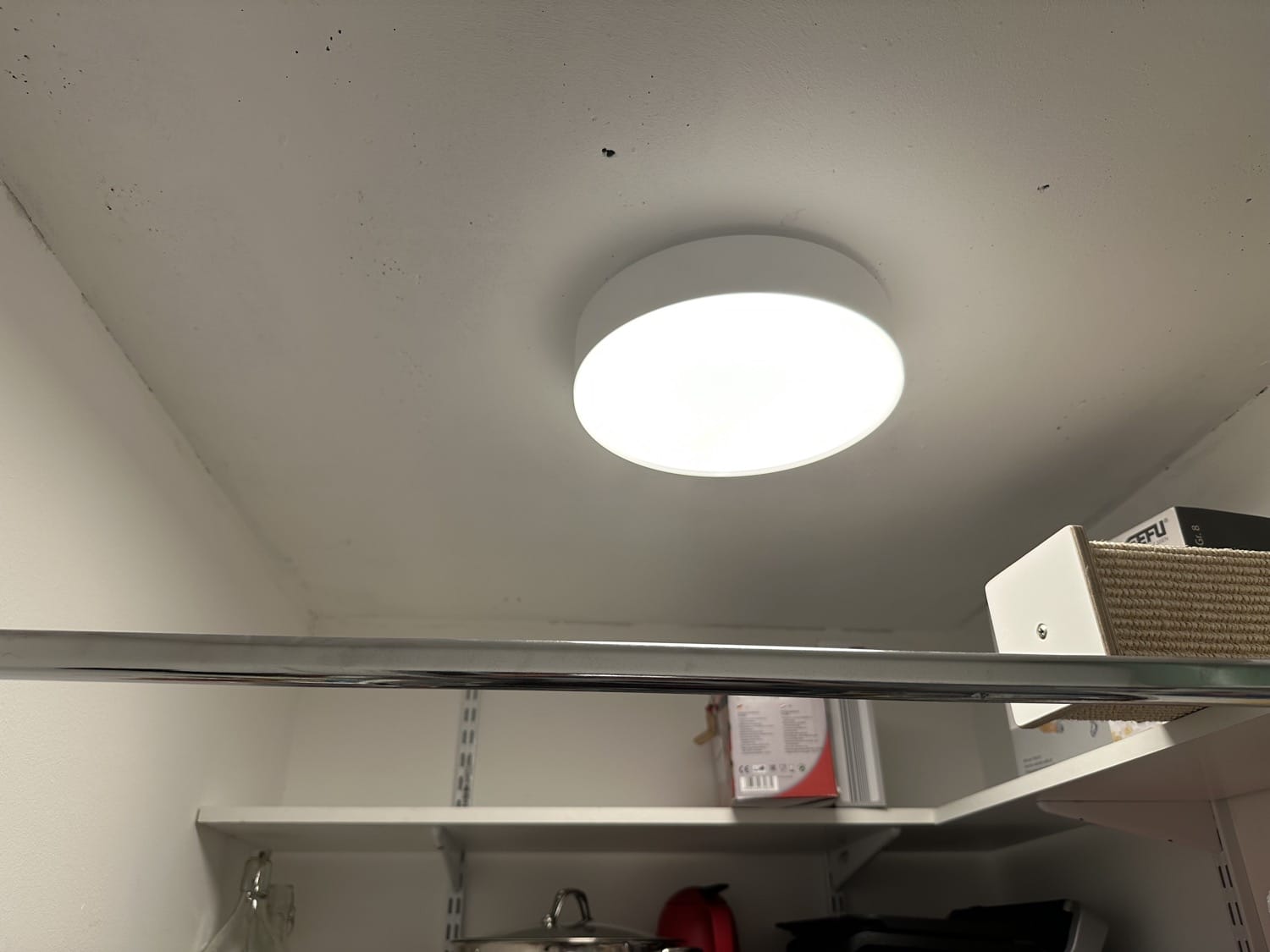 The Hue Enrave currently costs just under 93 euros in stores, for example at Make-it-Smart. The big question: Wouldn’t it be easier to equip a simple ceiling lamp with Philips Hue E27 bulbs?

The small Hue Enrave delivers a maximum brightness of 1,220 lumens at 4,000 Kelvin. If you consider that light sources installed in a ceiling lamp lose light due to the horizontal orientation, the lampshade and the cover, at least two Hue White Ambiance light sources would probably be needed to produce a similar brightness. The price is certainly around 40 euros. If you subtract the dimmer switch included in the scope of delivery of the Enrave, worth 20 euros, you are left with around 30 euros for the purchase of a ceiling lamp. In my opinion, the current price of the small Enrave in the shops fits.

Easy installation with a diameter of only 26.1 centimetres

Mounting is not a big challenge, because the black or white lamp, which is available in black or white, is fixed to the ceiling in the first step, complete with all the electronics, with the help of two screws. After that, the wiring can be done without having to hold anything in place. In the end, only the cover is inserted and the usual configuration in the Hue app can begin. 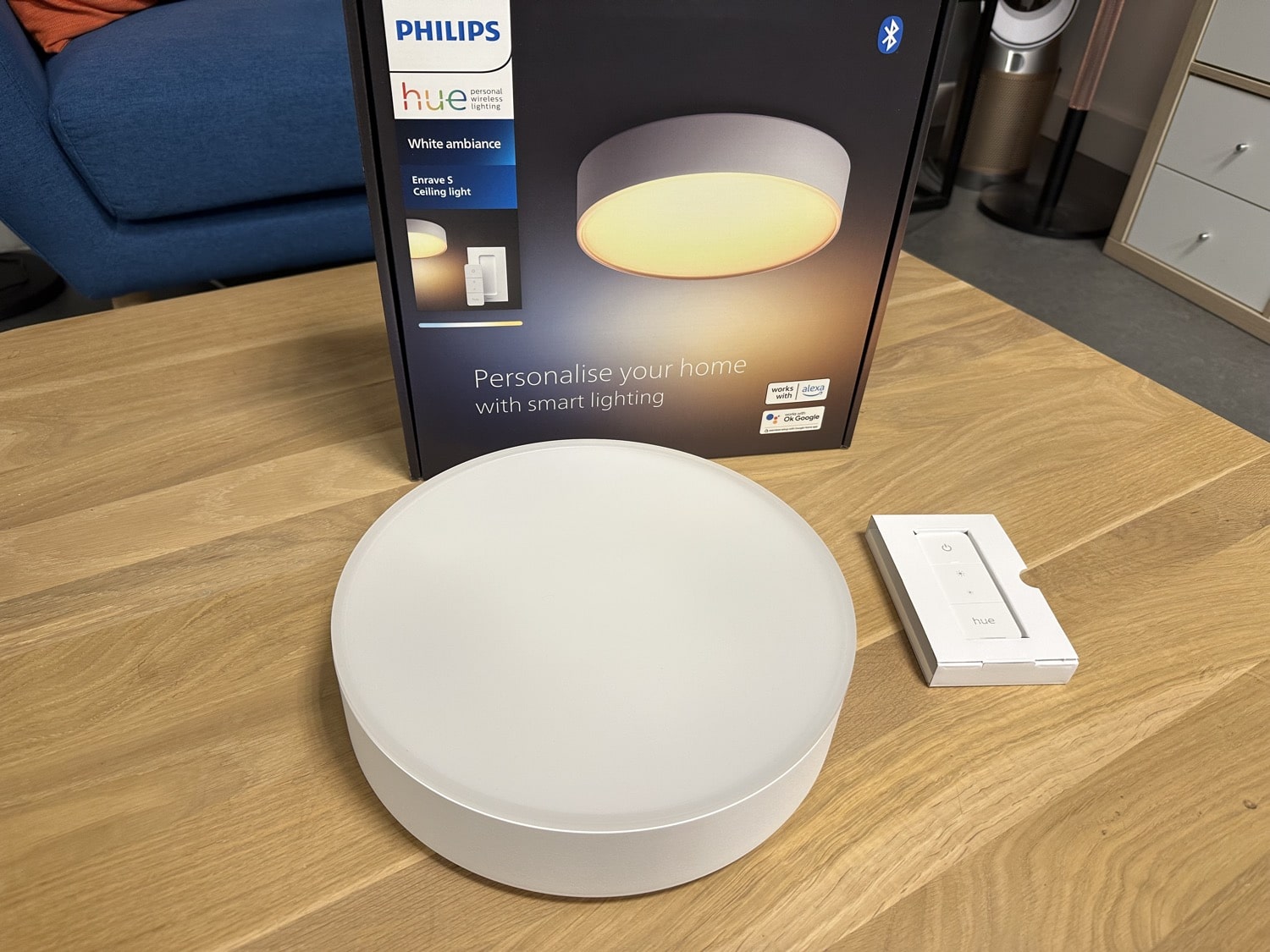 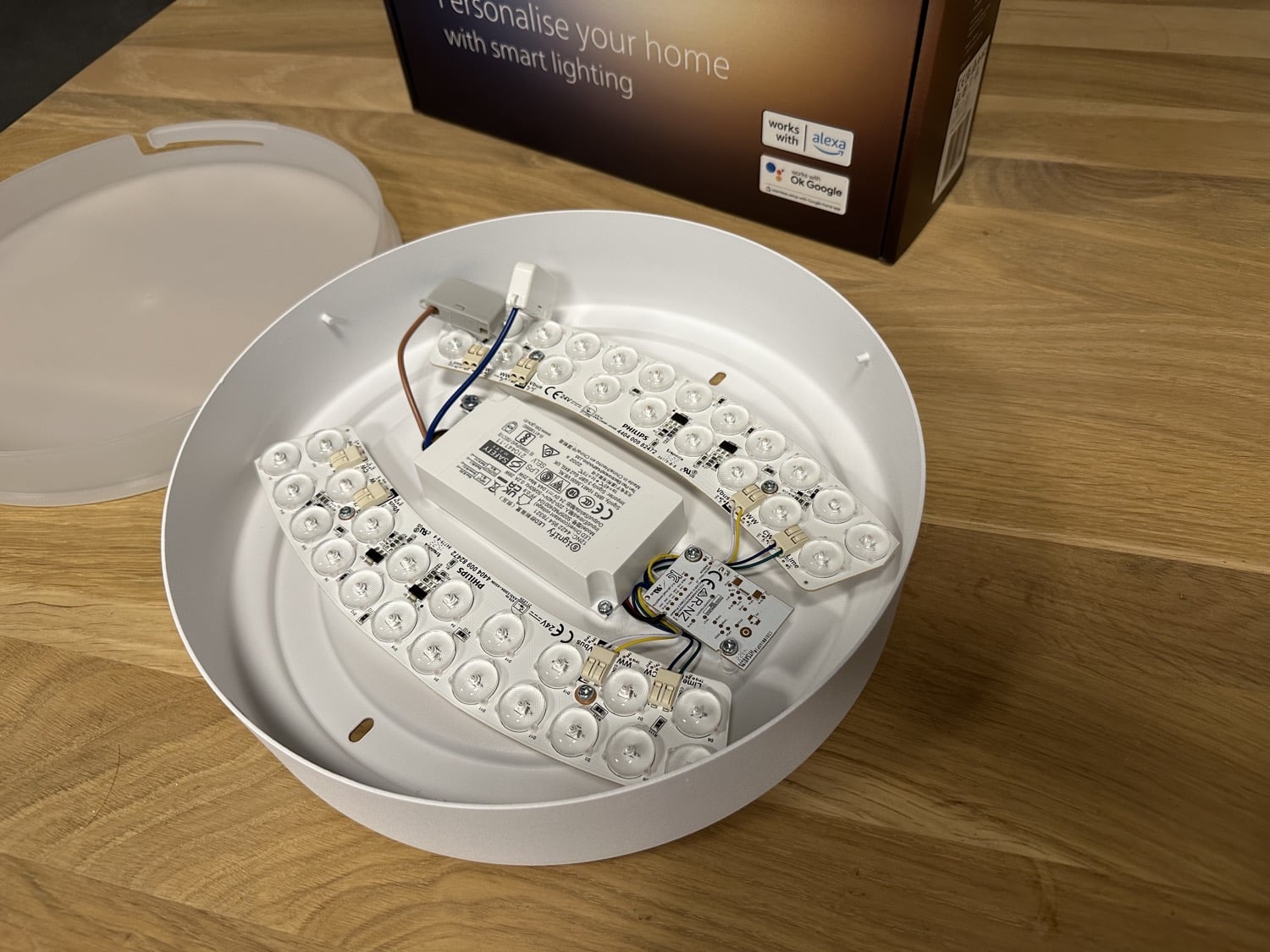 If I could improve something, it would probably be the bulky boxes in which the luster terminals sit. Depending on the length of the cable, these dangle back and forth in the housing of the small Enrave and can possibly cause a shadow to be cast. It would certainly be more practical if there were some kind of clip or other means of attachment.

Even though looks are not necessarily important in my small storage room, this space is now also off the to-do list for me. Due to the even illumination and the decent brightness, I could imagine the Hue Enrave in the small version also very well in other manageably sized rooms, for example in a hallway.

Previous articleCommunity Question of the Week: Dynamic scenes do not work
Next articleHue switches now show up as a device in the Alexa app