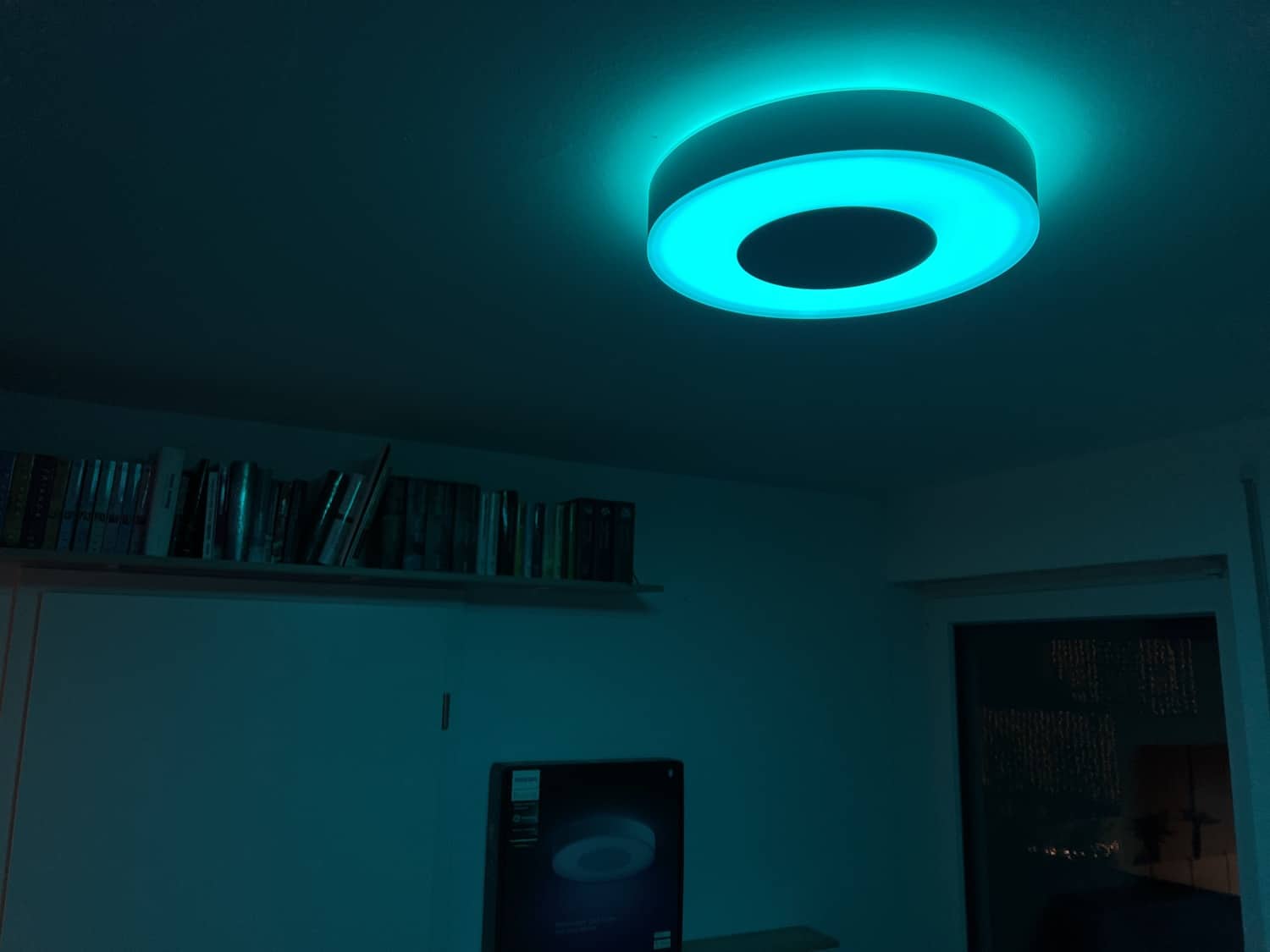 A lot of light, but also some shadow

Today I would like to take an in-depth look at the new Philips Hue Xamento. It is the first bathroom ceiling light by Philips Hue that is equipped with White and Color Ambiance technology. This means that in addition to various shades of white, the Xamento ceiling light is also the first of its kind to be able to display all 16 million colours. Until now, this was only possible with Hue ceiling lights that were not specifically designed for use in the bathroom. 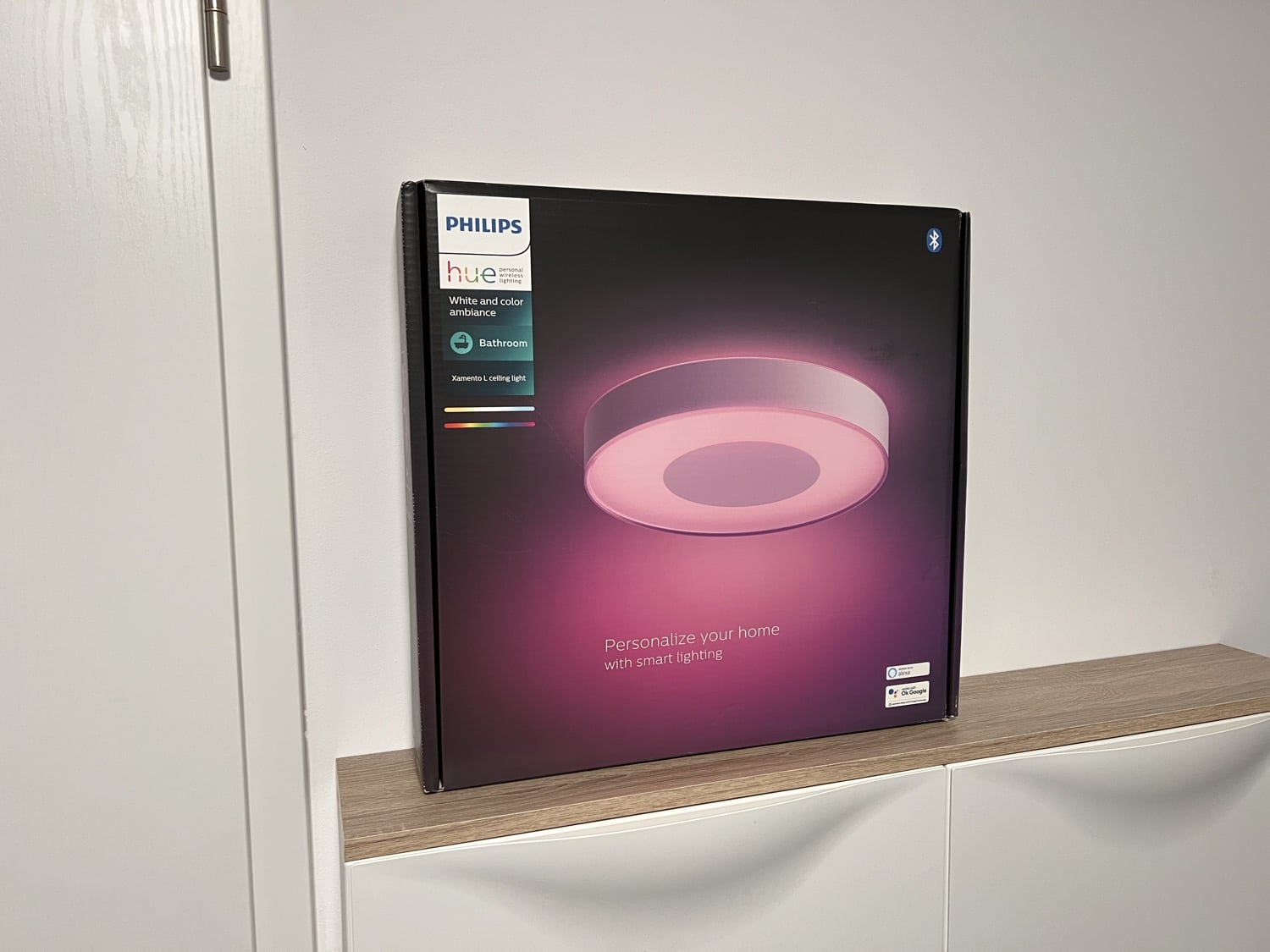 Getting your hands on the new Philips Hue bathroom ceiling lights isn’t easy at all. You can only order directly from a few retailers at the moment. I bought my model this week from Proshop, where both sizes are currently available directly from stock. It can be assumed that this situation will hardly change until the end of the year.

Differences to the Philips Hue Infuse

With the Philips Hue Infuse, the manufacturer sells a lamp that looks confusingly similar to the Xamento. Design, dimensions and brightness are absolutely identical. But the Infuse is also available in black and the retail price is 10 euros lower. So far, I haven’t had the Infuse in my hands, but in direct comparison, the Xamento should only have a better seal against splashing water. After all, it has IP44 protection and is therefore officially suitable for use in the bathroom.

Why it didn’t end up in my bathroom

However, it did not end up in my bathroom – and there are two specific reasons for that. First of all, in our rather small bathroom, like probably many others, I only have one light source on the ceiling. The Xamento is super bright, but can only display one colour at a time. Especially when we make ourselves comfortable in the bathtub at home, you can create a much lovelier atmosphere with several colours. Therefore, the classic bathroom ceiling light with three E27 Hue bulbs remains in use in our home. The second reason why the Xamento has ended up in a different room for me: I received it faster than the Hue Infuse and desperately needed better lighting in my remodelled office. 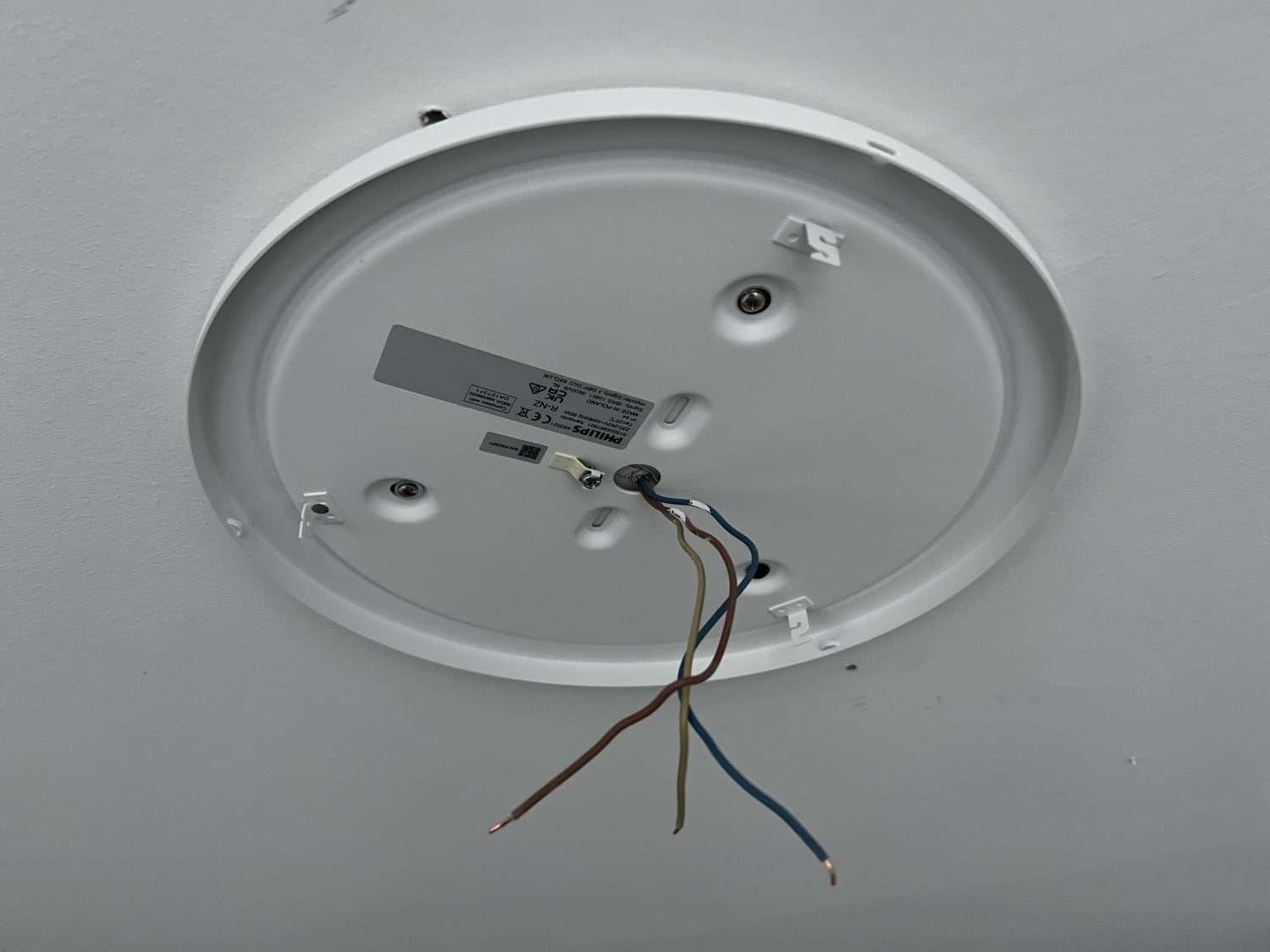 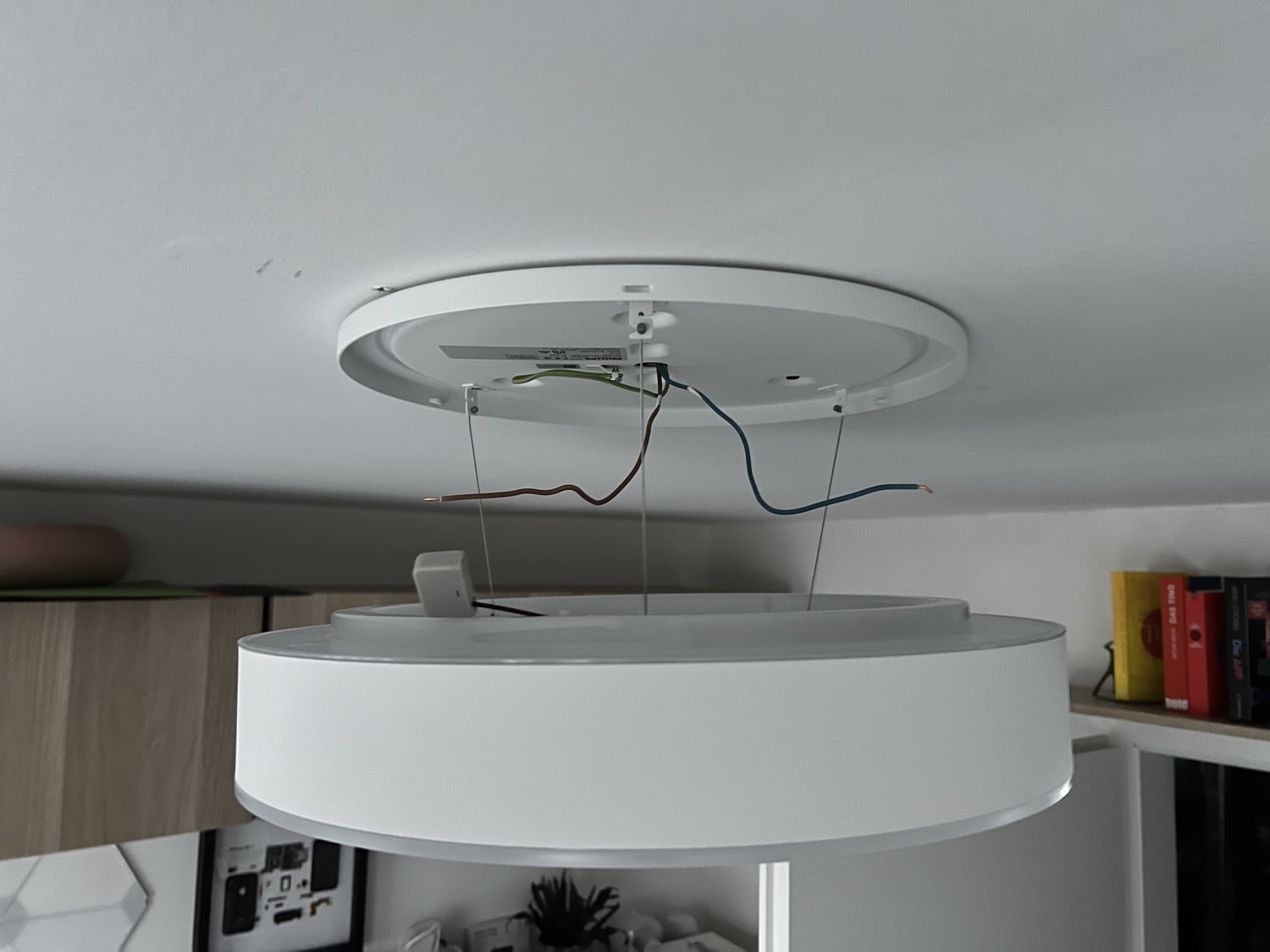 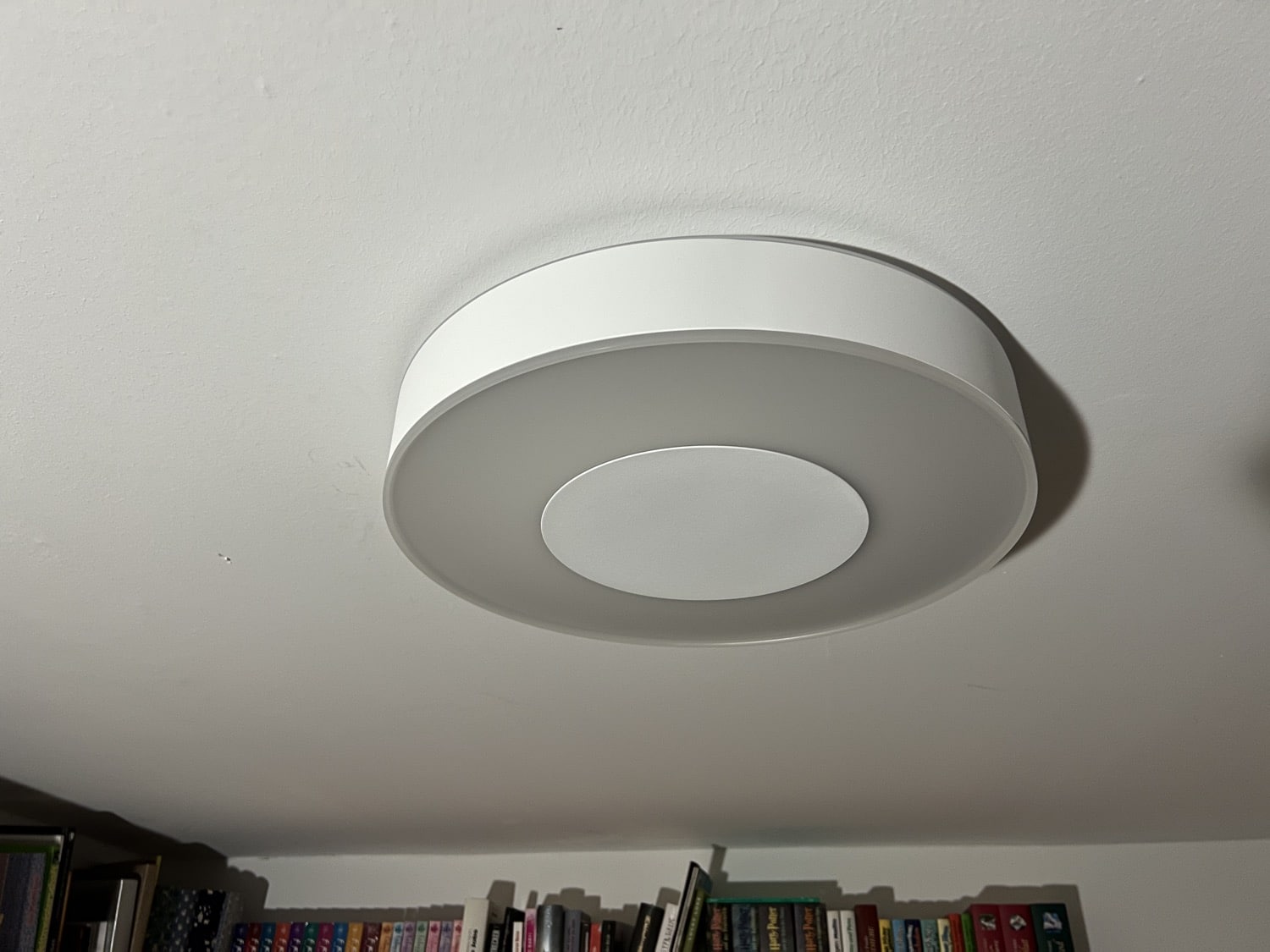 Philips Hue must also be praised for improving the installation of the Xamento. After the installation of ceiling lights was a real cramp in the past years, they have finally learned. With the Xamento, first the bracket is fixed to the ceiling with three screws, then you can hang the lamp body with three small steel wires. Now you can connect the cables at your leisure without having to hold the lamp at the same time. Once the cables are connected, you simply turn the lamp body into the holder.

In my workroom, which was more or less just a storage area before a renovation, there was previously a 3-way ceiling light with White Ambiance GU10 spots. They are already a few years old and only deliver 250 lumens, but four and a half years ago there were hardly any alternatives from Hue. The brightness was not even the biggest problem, much more annoying were the shadows that were constantly cast in the middle of one’s own field of vision. 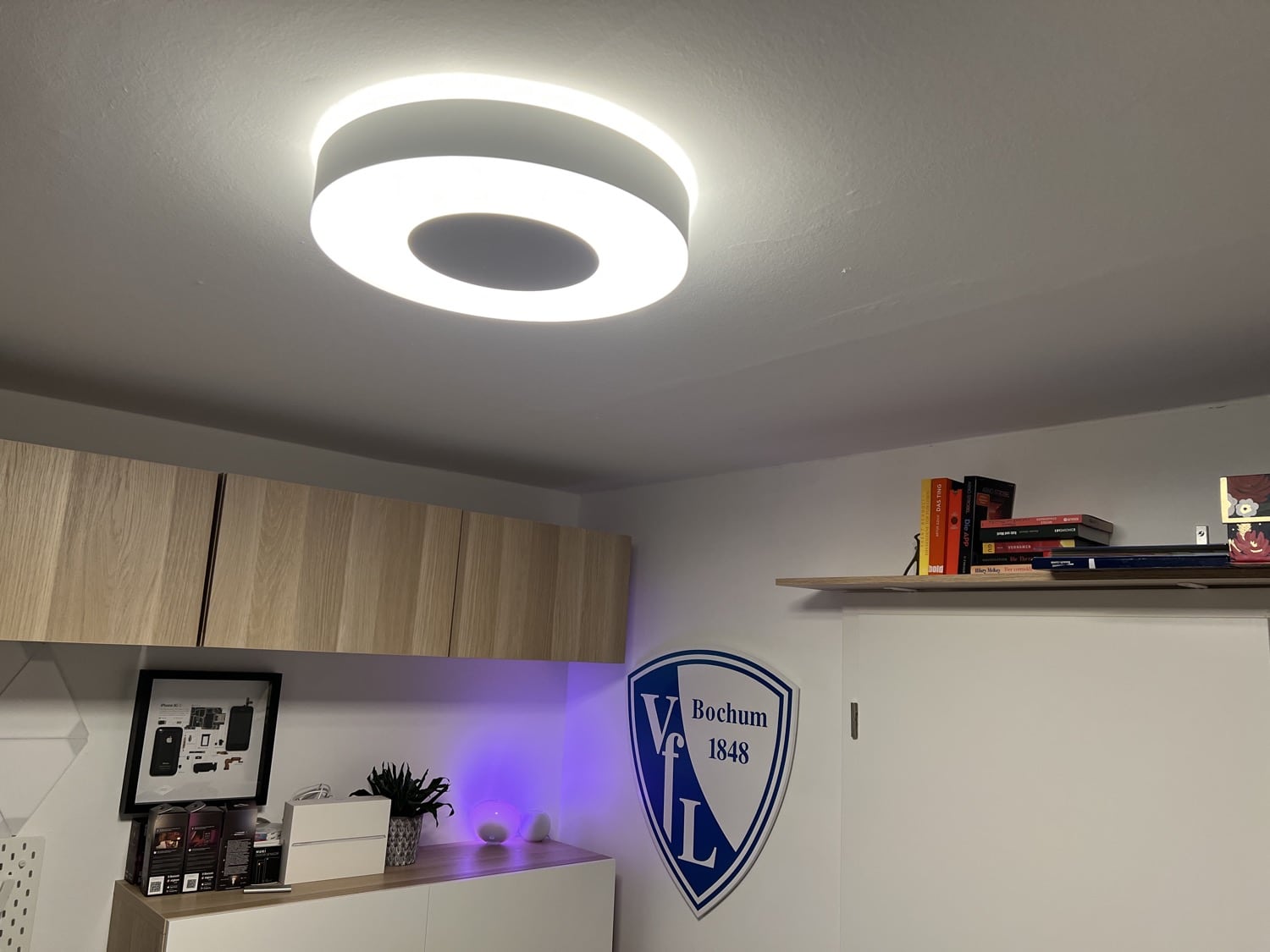 With the maximum of 3,700 lumens, with standard white it is still a very bright 3,450 lumens, things look very different with the Hue Xamento, of course. The entire room is flooded with white light. Remarkable is the rather small difference between the maximum brightness at 4,000 Kelvin and the brightness at normal 2,700 Kelvin. The difference here is less than 7 percent, whereas with the normal Hue lamp we are talking about almost 30 percent (570 to 800 lumens).

This is my conclusion

If you like the design of the Xamento or the Infuse, you will definitely get a very bright ceiling light that can also shine in colour. Even though the list price is steep, I can really recommend them – either the Xamento for wet rooms or the Infuse for normal living rooms. As soon as the supply situation improves, the price should hopefully come down a bit.