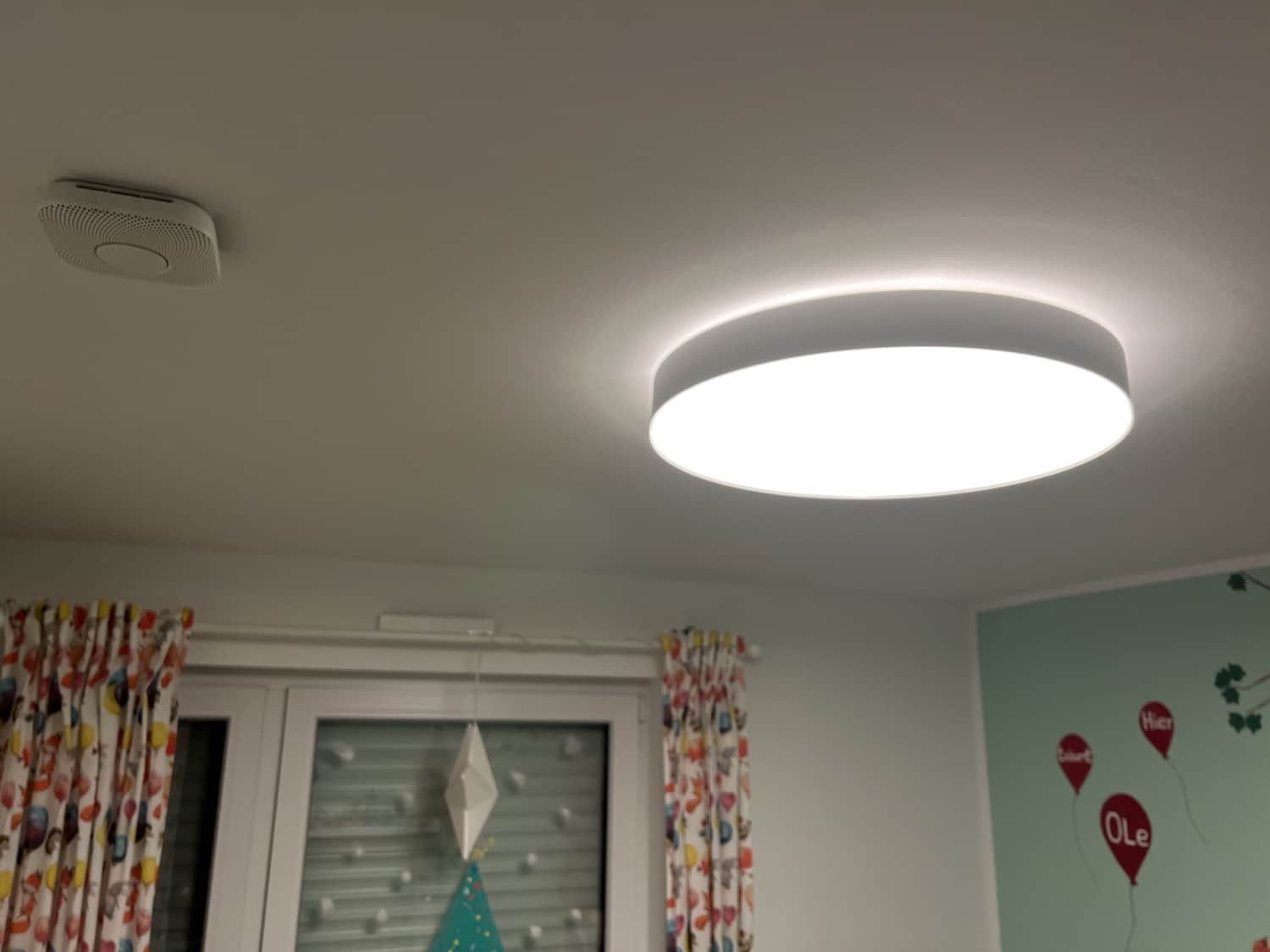 Hue Enrave: It could be just a little bit bigger

Fabian1 Comment on Hue Enrave: It could be just a little bit bigger auf Deutsch lesen

After the successful installation last year, I would like to give you a few impressions of the Philips Hue Enrave ceiling light today. It comes as a classic White Ambiance product with a dimmer switch and is one of the new releases from last autumn. Philips Hue had promised the sales launch at the end of the year and also kept it – although some models of the Enrave are still quite poorly available.

I opted for the XL variant in white, which can currently be ordered from Proshop for 249.90 euros. But there are different models, the prices start at around 85 euros. I have simply created a small overview for you:

The specified light output is the maximum value that can be achieved at 4,000 Kelvin. The XL model that I have installed in my home still achieves 4,750 lumens at the standard white of 2,700 Kelvin. This is roughly equivalent to the light output of eight standard Hue lamps with White Ambiance technology, so it’s quite impressive. 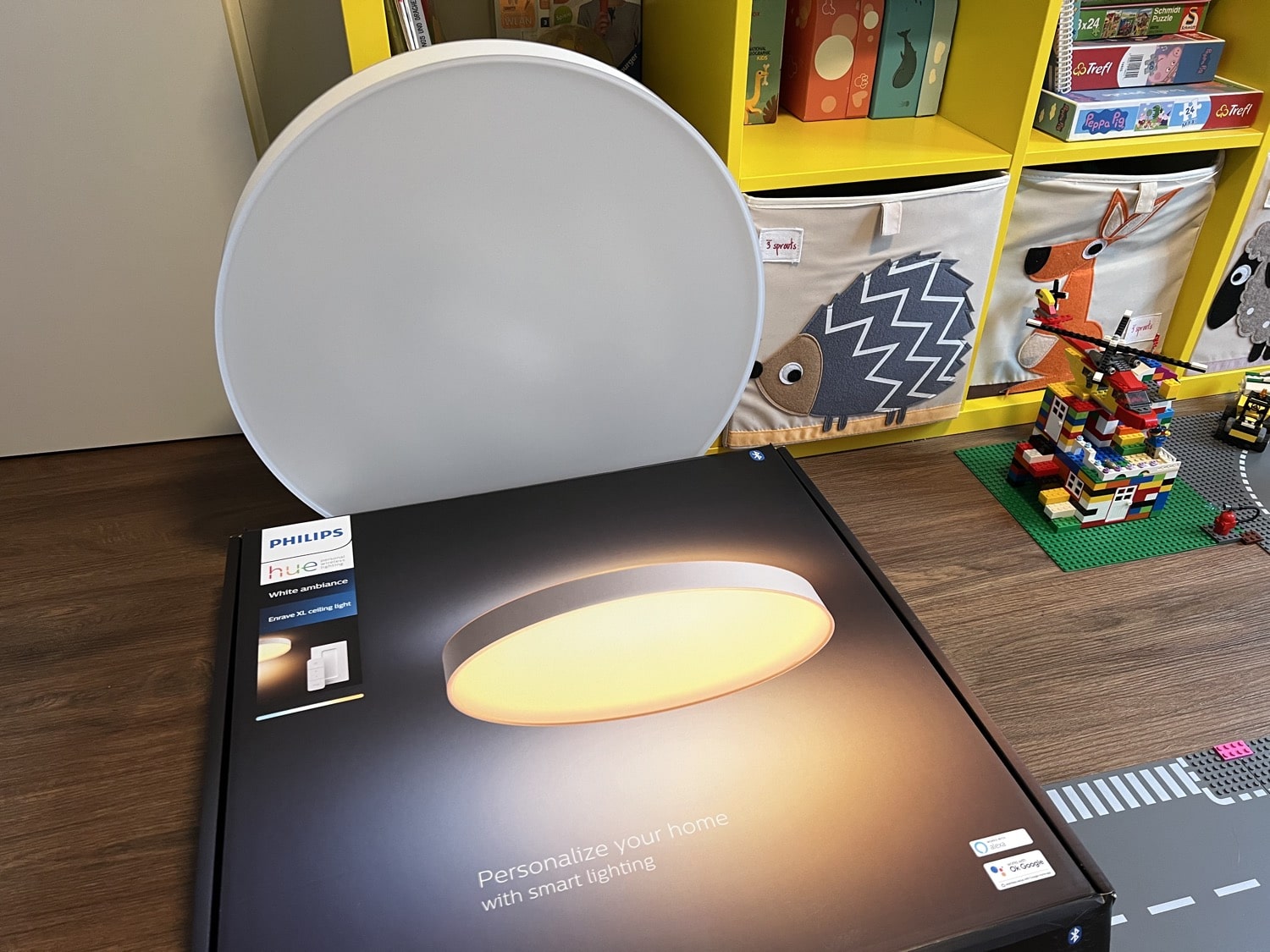 Actually, I wanted to install the extra-large Philips Hue Enrave in my living room, because there currently hangs a “normal” ceiling light with seven individual E27 Hues, which of course nibbles away at the limit of the Hue Bridge. However, there is a visual problem: with a diameter of 55.1 centimetres, even the largest Enrave is significantly smaller than my living room ceiling light, which comes to 98 centimetres.

From my point of view, the difference between the Enrave models M and L is only 4.4 centimetres, which is too small – Philips Hue could definitely have done without the M model, especially since the maximum brightness is significantly lower compared to the L model. After all, you can always dim it. Instead of the M, I think it could have been an XXL with a diameter of 75 centimetres, if not even more.

But well, that’s just my personal opinion. And that’s why the new Philips Hue Enrave didn’t end up in the living room, but in the children’s room. Up to now, a Philips Hue Centris was installed there in the Cross version, so it had a completely different look. And what can I say? The Enrave looks less futuristic, but rather cosier and warmer. But that, too, is ultimately a matter of personal taste.

What I can definitely say: The installation is really easy thanks to the new mounting, which was also used for the Hue Xamento. You can manage very well even without a helping hand. 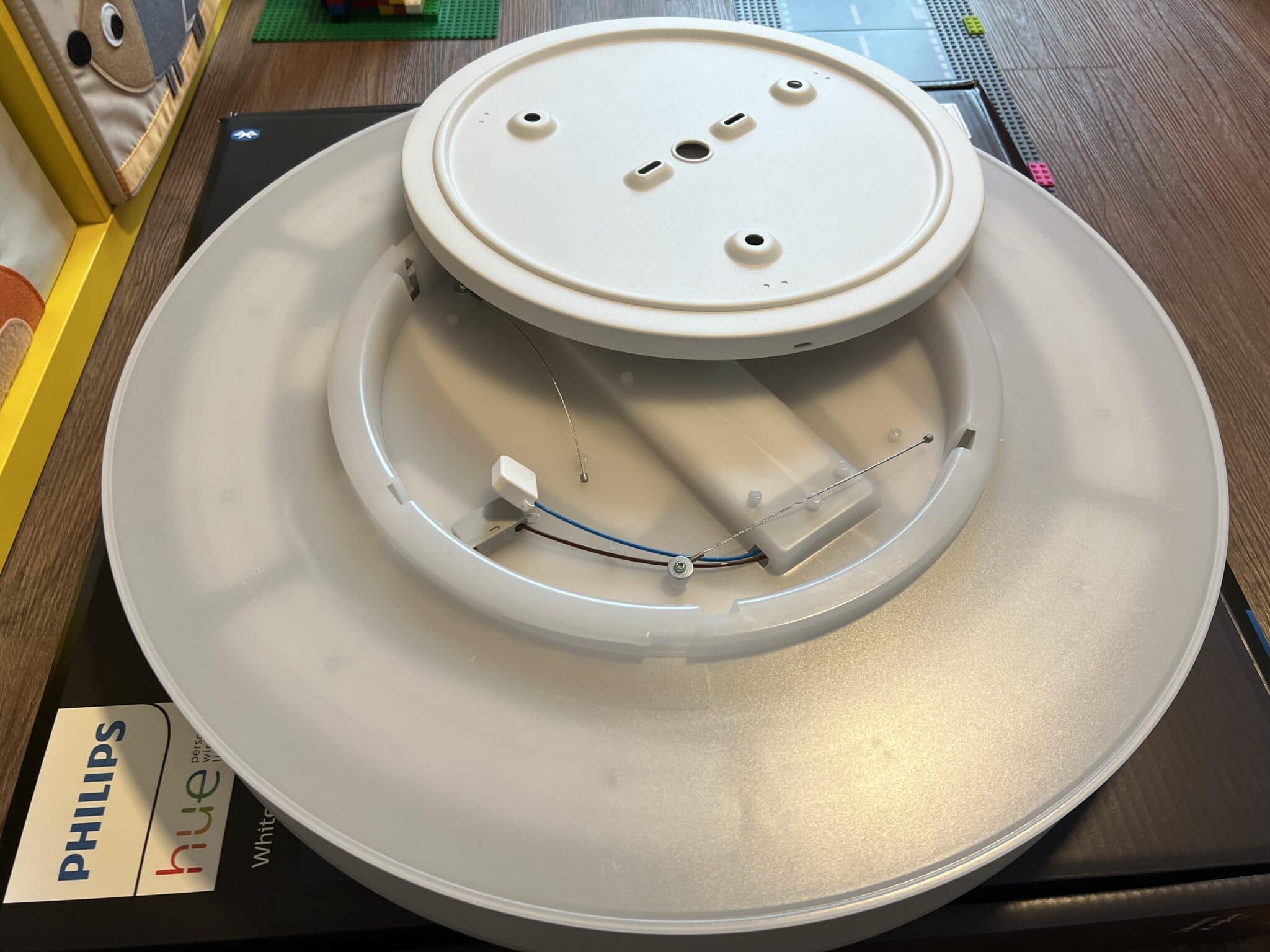 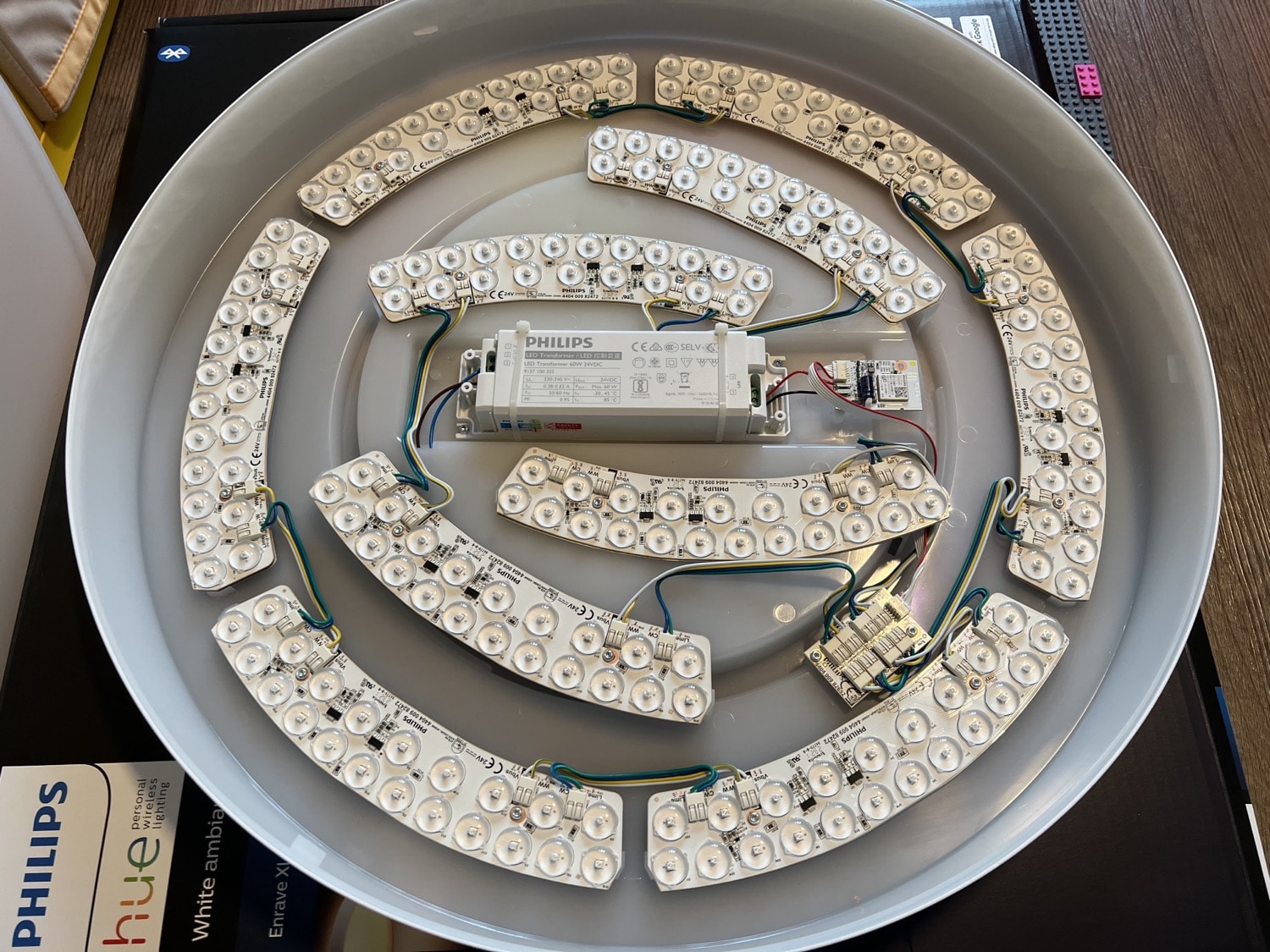 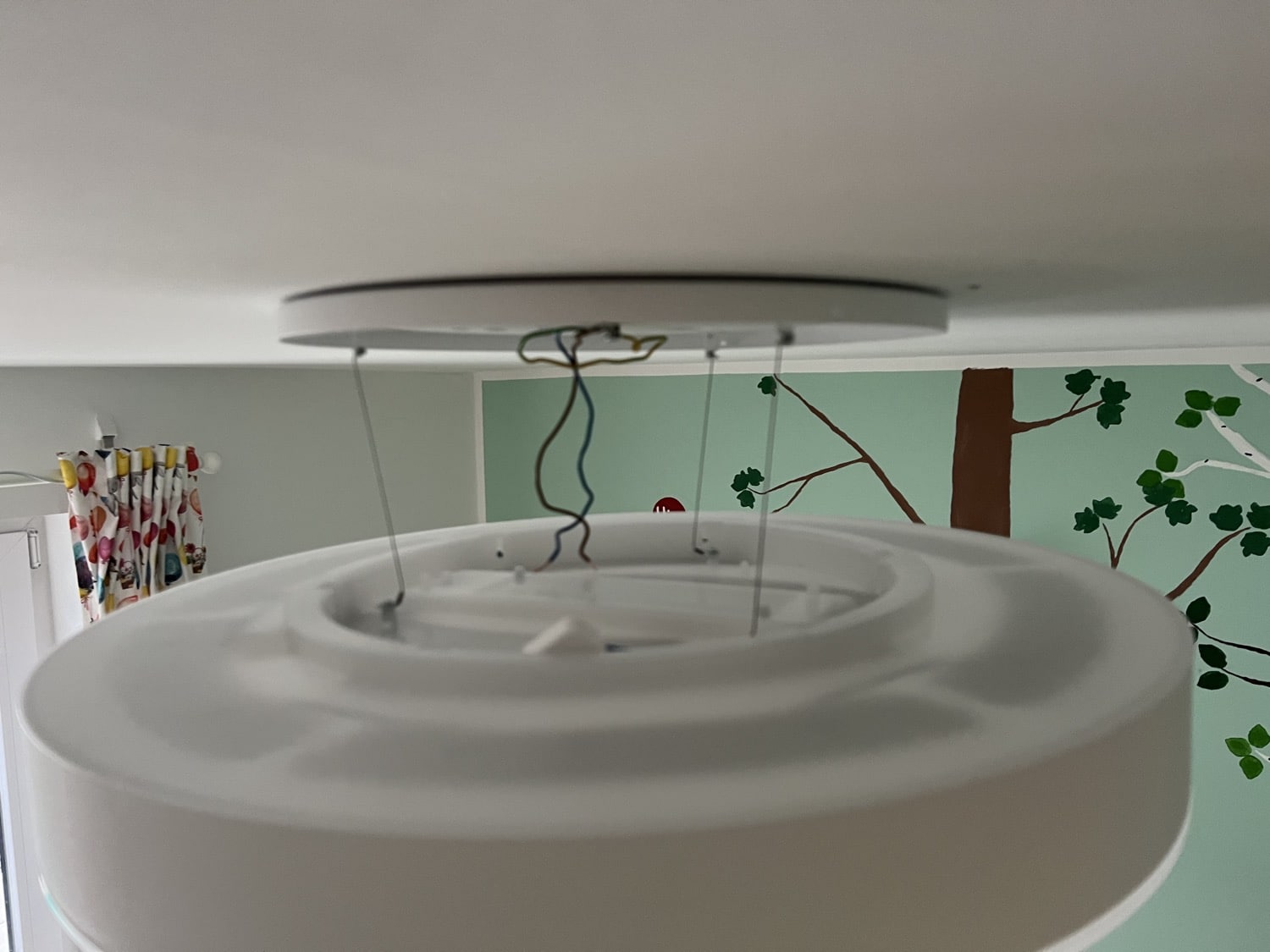 The result after the installation is also impressive in my opinion. The Hue Enrave distributes a lot of light very evenly in the room, some light is also distributed around the lamp on the ceiling. The various white tones can be adjusted as usual and the XL version also cuts a good figure when dimmed low, given the enormous number of LEDs. However, I would not necessarily use this large ceiling light as a night light.

I would be happy if there were a slightly larger Enrave. With the models available so far, I would definitely go for the two larger versions, as they offer much more brightness than the two small Enraves. As I said, you can always dim them. 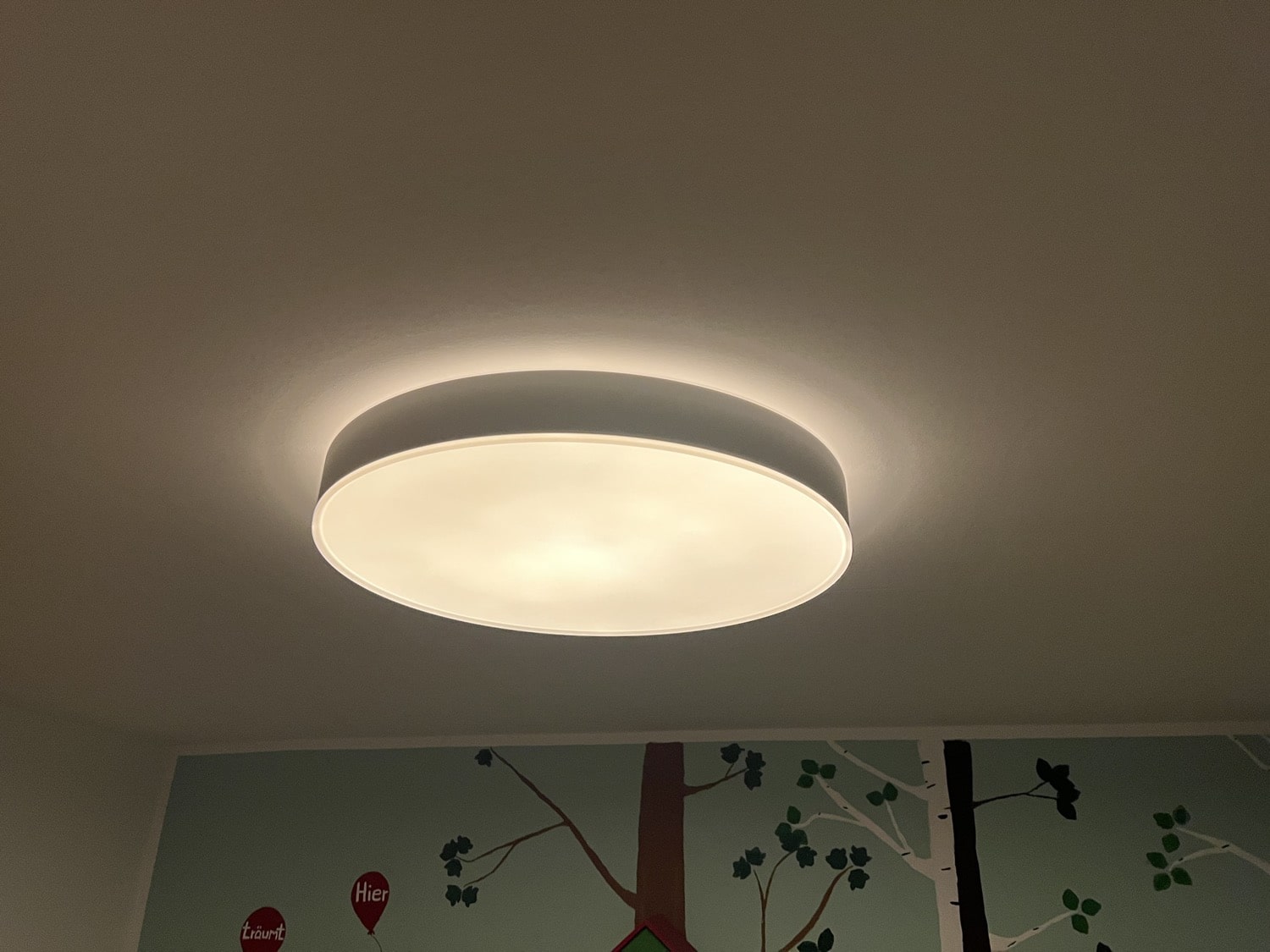