1st to 4th generation: these are the differences of Hue lamps & sets

You don't quite understand what it is about the different generations of Hue products? It's easy to explain.

Mel2 Comments on 1st to 4th generation: these are the differences of Hue lamps & sets

Philips Hue products have been around for about five years now, and of course a lot has happened during that time. The best known example is certainly the Bridge, although here the difference between the first and second generation can be seen very quickly: the first generation Bridge is circular, the second generation square and has a blue illuminated ring.

Technically, the differences between the two bridge models can also be explained quickly. The second generation is especially interesting for Apple owners: only with these products the Hue system can be integrated into HomeKit and Siri.

These are the lamps’ differences

While the second-generation Hue bulbs are around 25 percent brighter than the first generation and can be dimmed a little more, the third generation offers significantly improved colour rendering of green and blue tones compared with the second generation. The following video shows you exactly what this looks like.

But how to distinguish between the different generations of the E27 Hue lamp? It’s very simple:

What is it about the fourth generation?

For some time now, retailers such as Amazon have also been offering a fourth-generation Hue Starter Set. Nothing has changed in terms of technology, but much more in terms of the contents of the package: in addition to the bridge and the three lamps, the Starter Set now also includes the handy dimmer switch.

What has changed with Hue’s LightStrips?

The LightStrip Plus has also been updated: the one-meter extension now comes with a connector to allow the LED strip to be placed around corners. Unfortunately, you can only recognize the new models by their packaging: Below the white Philips logo, the Hue logo is now also available with a white background – unfortunately, you won’t be smarter until later when ordering online.

Additionally, the LightStrip Plus has changed a lot. Besides a new cabling some of my readers report that there must have been some changes in the technology as well. Not only the design of the single LEDs has changed slightly, apparently Philips uses a new power supply as well. When displaying some colors and in dimmed state this model tends to whimper. So far I have not been able to check this phenomenon myself yet. Unfortunately, the only difference is the packaging. 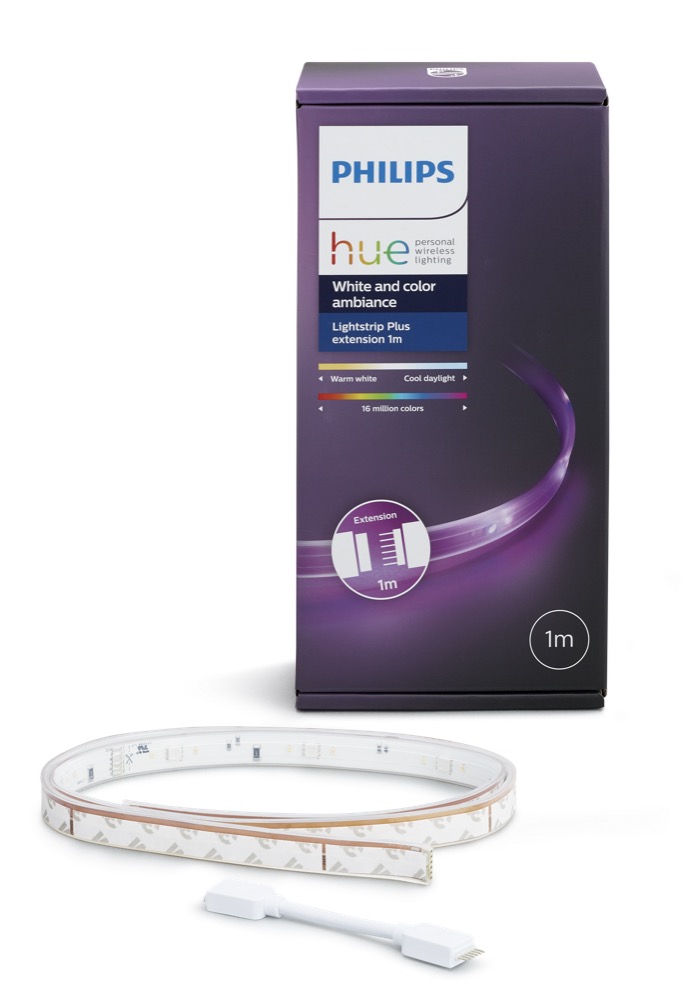