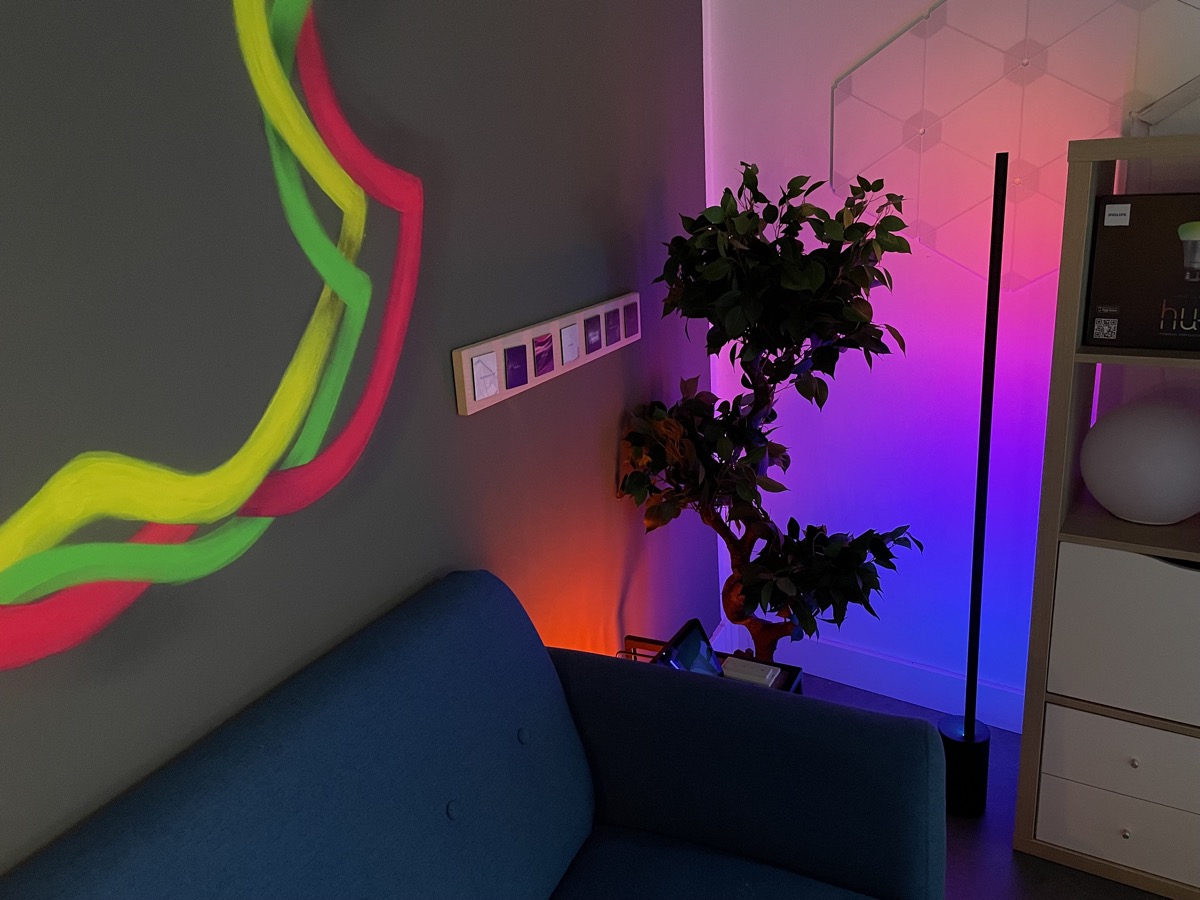 Even more colours on the wall

After I was able to announce yesterday that Philips Hue has activated the new gradient functionality in its app, I can now finally introduce you to the first new product that can create a colour gradient: The Philips Hue Gradient Signe floor lamp. I was allowed to try out the black model for you, a white version is also available as an alternative.

The Hue Signe has never been really affordable. The previous model already cost 269 euros and now Philips Hue is going one better: 299 euros are due for the large floor lamp. We certainly don’t need to discuss the fact that this is a lot of money. It should also be clear that the Signe is not to everyone’s taste. However, I find that the gradient technology offers a much more exciting experience.

Before I get to the colour gradients, I would like to briefly go over the technical data. The Signe has an overall height of 146 centimetres, 20 centimetres of which are accounted for by the stand. This makes the Gradient Signe 3 centimetres smaller than the old Signe. No really relevant difference, which also applies to the weight: the new model is about 100 grams lighter. 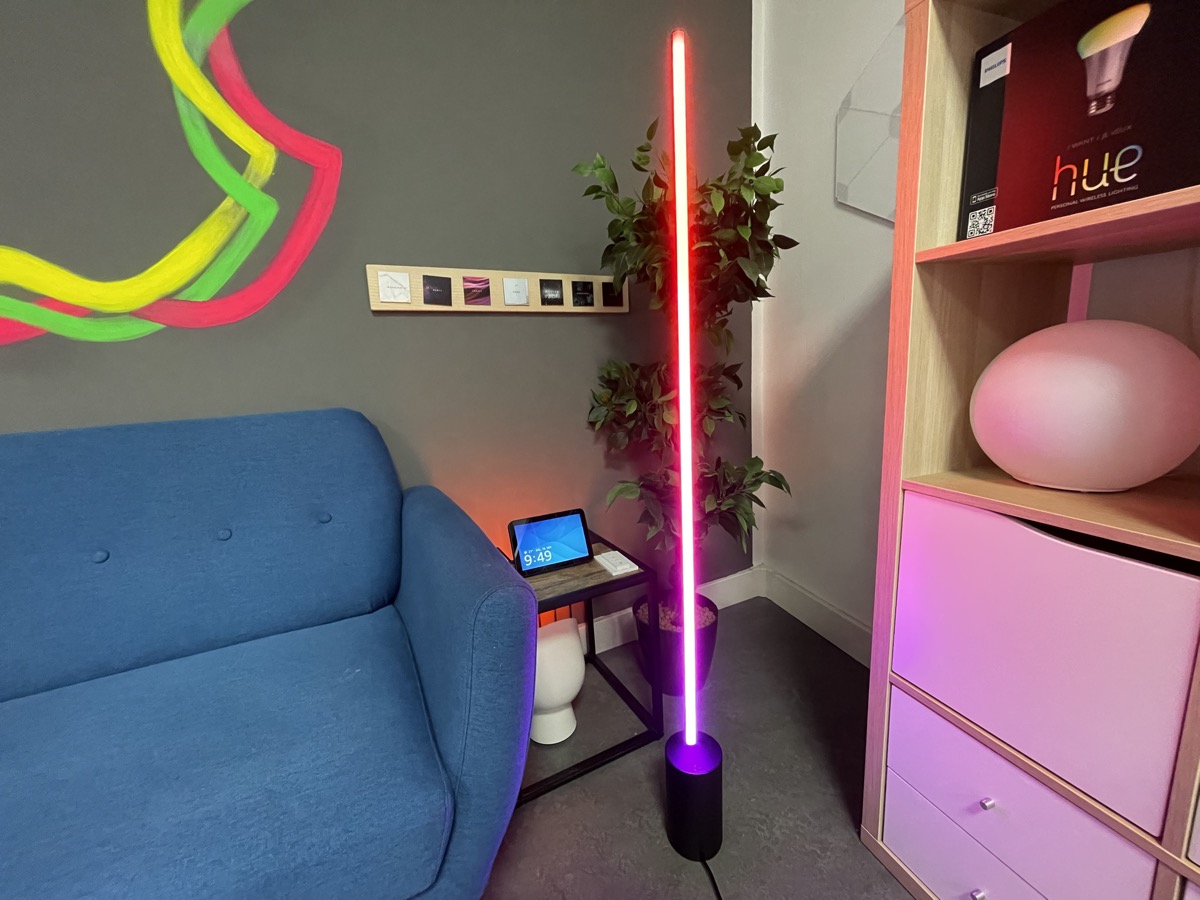 My first reason for criticism is the power cable. At least the thick transformer is hidden in the stand and there is only a simple power plug at the end of the cable, but the 170-centimetre-long cable is also fixed to the stand. The manufacturer does not intend to detach the cable, because two of the five Torx screws on the stand are so small that I could not open them with the tools I have. The warranty would be void anyway.

Why is this so important to me? If you place the Hue Gradient Signe near a power socket, 170 centimetres of cable are simply not needed. It would be much more practical if you could simply connect a shorter Euro plug cable to the stand. I also can’t imagine that this would have been significantly more expensive to produce, especially since they would then simply have had to include a different cable for countries like the UK or Switzerland. 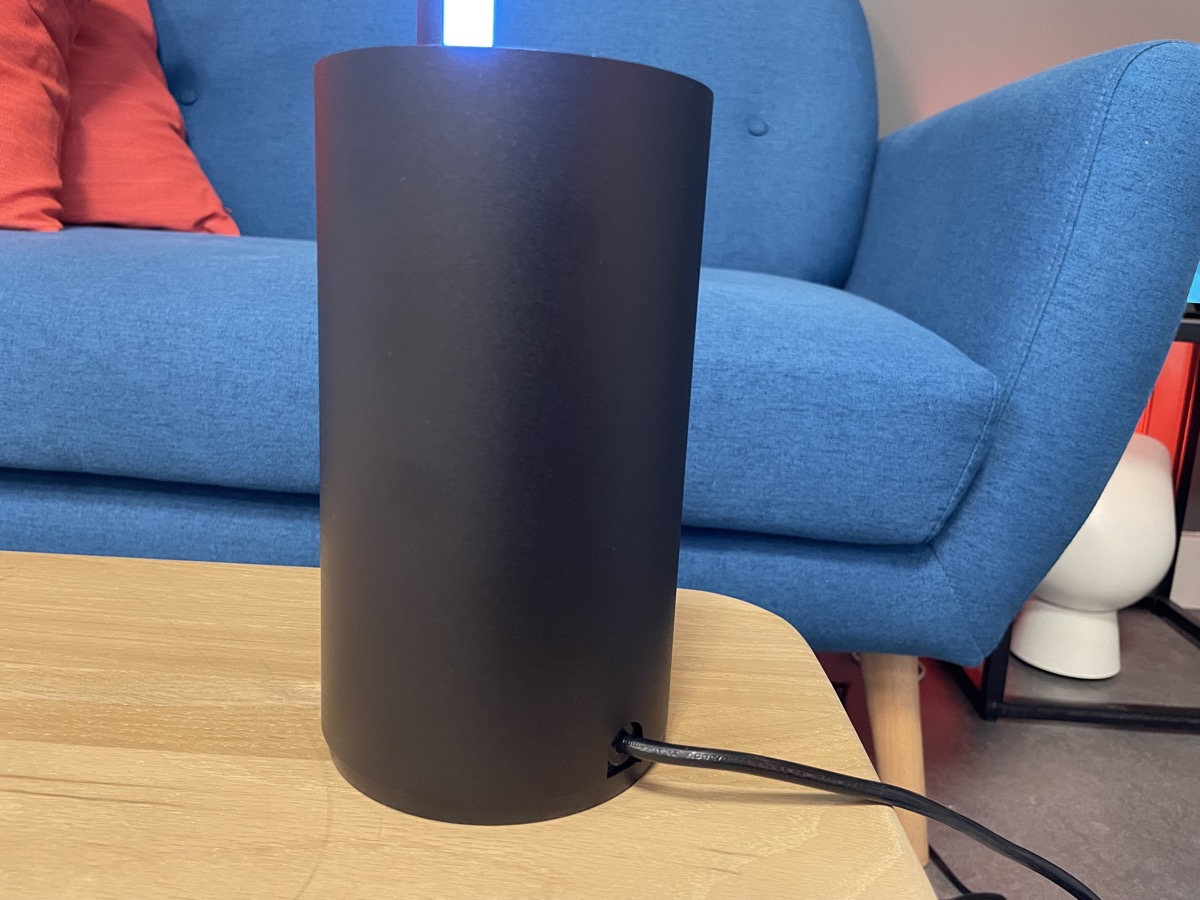 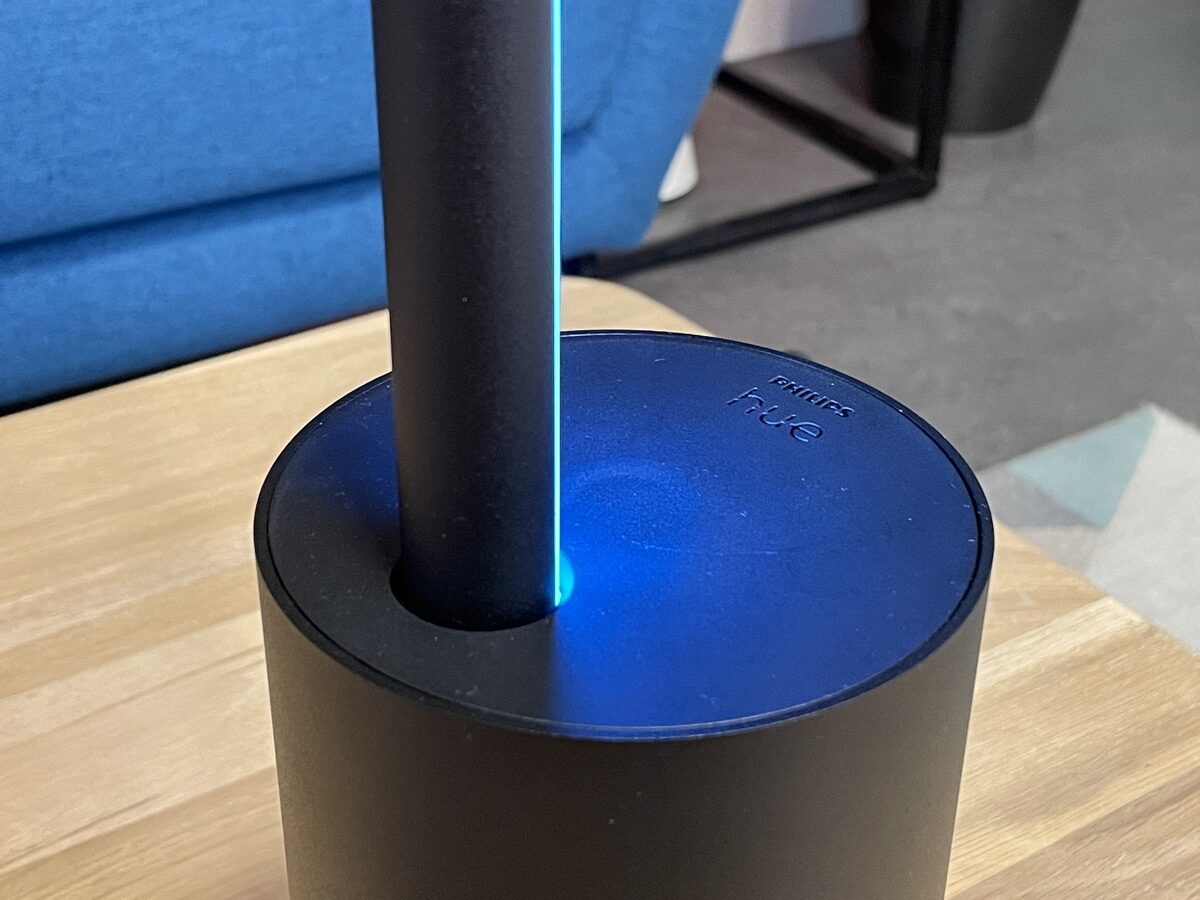 The new gradient technology is simply a joy to behold

It’s time for a little cheering up. Even though the new Philips Hue Gradient Signe so far only allows the selection of three segments instead of the promised five segments in Ambiance mode, the colour gradients just look fantastic. Of course, this is a matter of personal taste, but I really like the new possibilities. 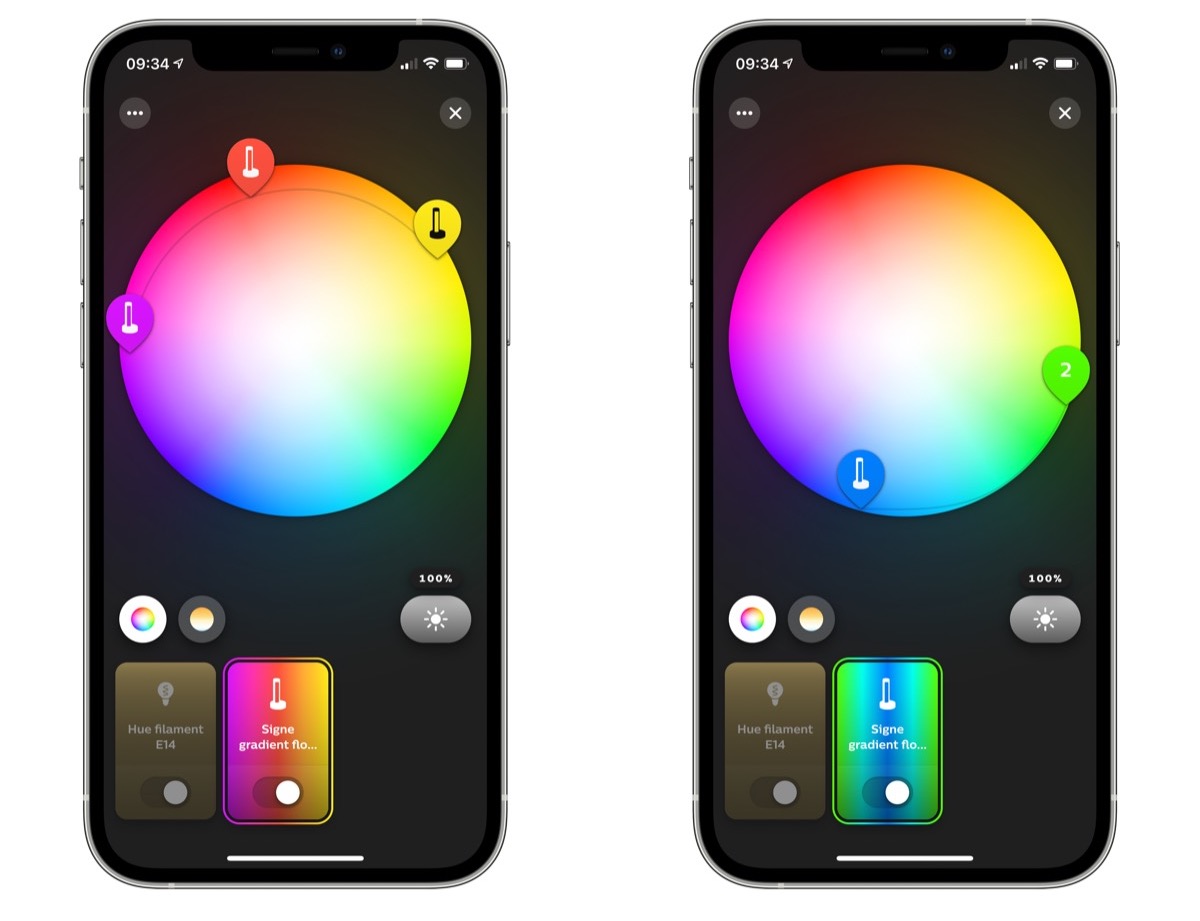 And even though you can only freely set three segments so far, the automatically generated colour gradients display significantly more colours. In my test, I was able to count ten individual colours that can be displayed by the Hue Gradient Signe floor lamp. 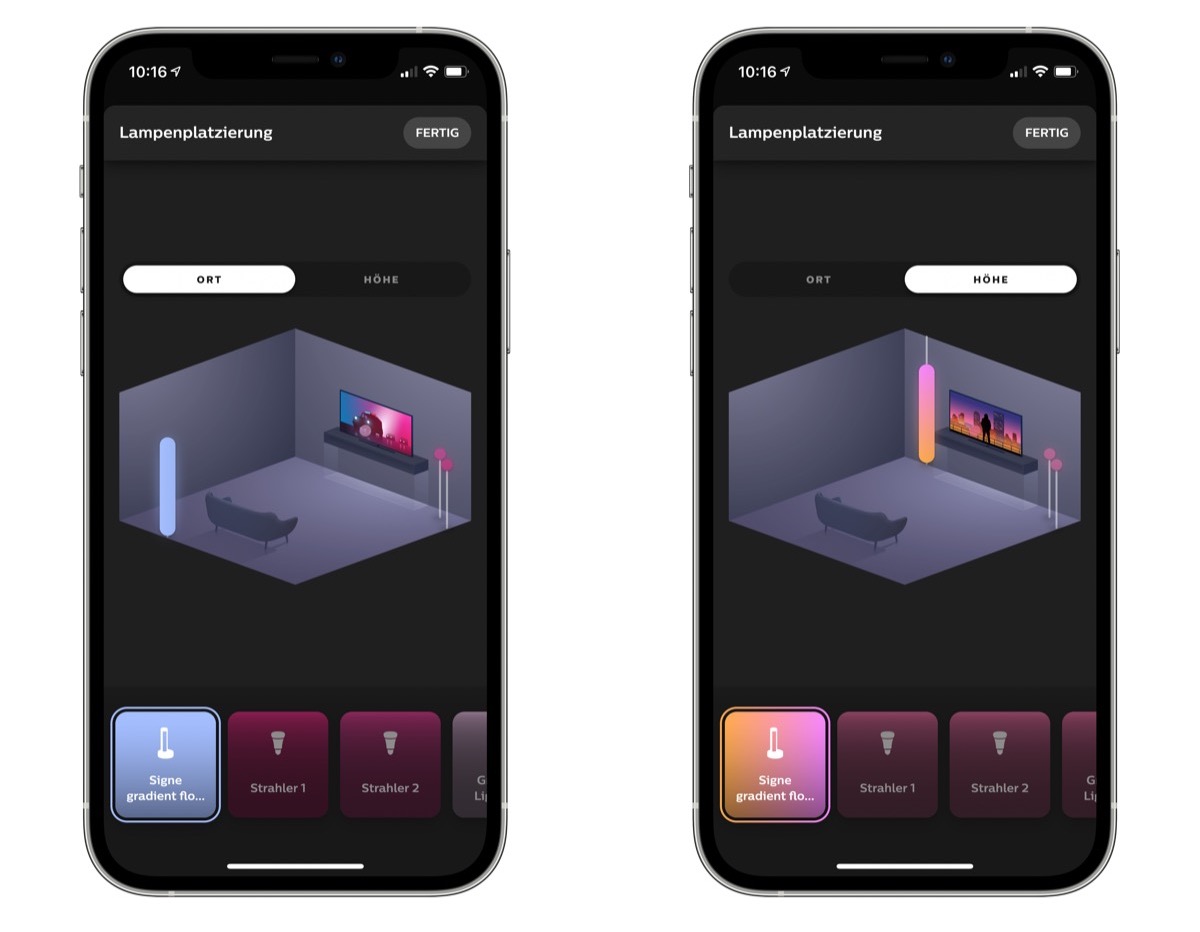 And Hue Entertainment also benefits from the new Gradient technology, because even in interaction with the Hue Sync Box or the Hue Sync Desktop App, the new version of the floor lamp displays not just one, but several colours. The placement is done as usual via the room view of the desired entertainment area.

This is how bright the Philips Hue Gradient Signe can shine

With coloured settings, the Hue Gradient Signe naturally does not shine quite as brightly as with white tones, with which, by the way, no gradients can be created. At the standard setting of 2,700 Kelvin, Philips Hue indicates 1,800 lumens, at 4,000 Kelvin it is 2,550 lumens and thus a little bit more than its predecessor. But I am sure that the new Signe will shine colourfully in most cases. 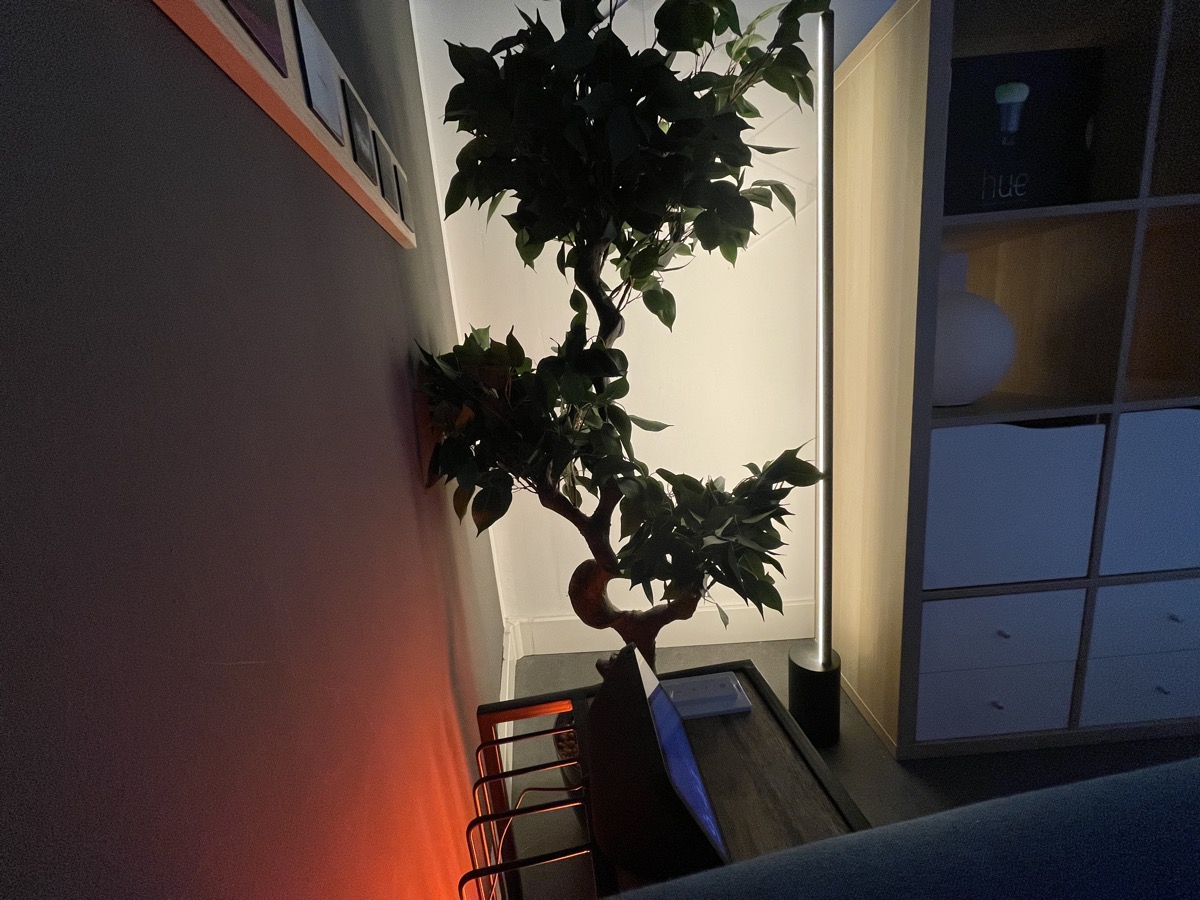 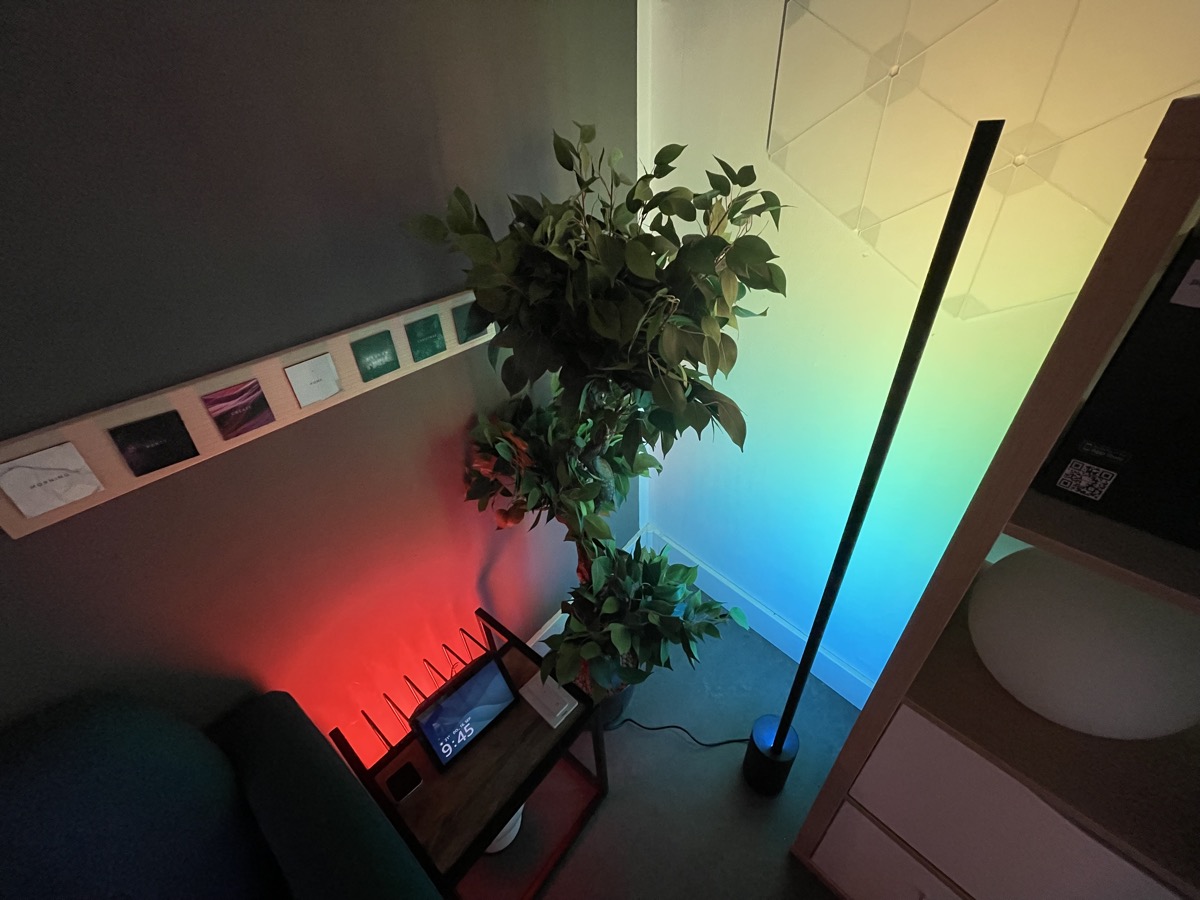 What can we conclude now? The Hue Gradient Signe with its unusual design does not meet all tastes, and it is anything but cheap to buy. Compared to its predecessor, however, it offers much, much more. For me, there is no question that the Philips Hue Gradient Signe is fascinating. Only the thing with the power cable really bothers me.

Previous articleWhy do new Philips Hue lamps have such a poor energy label?
Next articleAmbiance Gradient Lightstrip: Review of the Philips Hue innovation